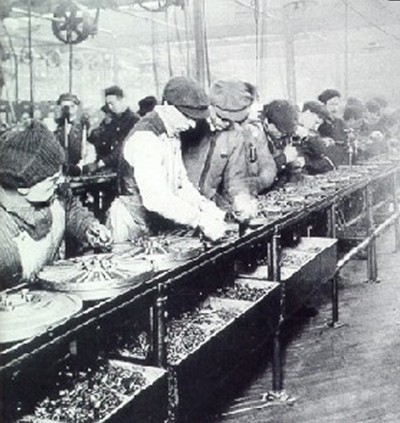 If there’s one thing I dread about the income inequality debate in general, and the minimum wage debate in particular, it’s those occasional uncomfortable moments when the anti-union, anti-immigrant, anti-semitic Henry Ford is brought up as an icon of demand-side economics. In 1914 Ford famously implemented the $5 Day (about $117 in 2014 dollars), more than twice the $2.25 prevailing wage at the time for a 9-hour auto factory shift. The story goes—and it’s a story perpetuated by Ford himself—that the goal was to pay his workers enough to transform them into car buyers themselves, thus increasing sales.

It’s a great story, and one that neatly illustrates the demand-side arguments. But unfortunately, it’s bullshit. No, the real reason Ford more than doubled his workers’ compensation was that he came to believe that paying higher wages would conversely lower his labor costs. And he was ultimately proven right.

So as you can expect, morale was low at Ford’s factories, and the turnover rate high. Absurdly high. As much as 300 percent annually. Throughout the year of 1913, Ford hired 52,000 workers in order to maintain an average workforce of only 14,000. Every new worker required weeks of costly training and break-in. Assembly lines sometimes screeched to a halt for want of enough qualified workers. Absenteeism and turnover made it impossible for Ford to keep up production and produce cars at the low prices his business model demanded.

And so when Ford introduced the $5 Day the next year, it was with an eye toward reducing turnover, thus lowering labor costs and ramping up production. And it worked! Turnover plummeted and productivity soared. The rest of the auto industry initially dismissed Ford as crazy, but they all soon followed his example.

And here’s the thing: once the other auto makers matched Ford’s wages, taking away his competitive advantage in the labor market, turnover didn’t revert to the bad old $2.25 days. Better paid workers do a better job. They’re more loyal. More productive. Less likely to call in sick. And less likely to constantly be on the lookout for a better deal someplace else.

Yes, Ford’s $5 Day did help kickstart the trend toward higher wages that ultimately primed the demand side pump on which our modern consumer-driven economy was built. So that part of the story is true, at least in effect, if not intent. But the benefits to Ford were more direct and immediate. Higher wages delivered better workers, and lower labor costs.

And those are the same sort of financial benefits employers bemoaning the cost of a $15 minimum wage have refused to factor into their equations.