I was pretty much exhausted by the end of yesterday, but here’s a little bit more…

The folks on the campaign bus are interesting people. I asked the person across the ailse from me what they did.

“I’m with the Washington Education Association.”

Other folks on the bus included union folks. Electrical workers, government employees, teachers, and firefighters. The guy I talked to for about 20 minutes about Seattle firefighters and Seattle police?? Turns out he’s the head of the WSCFF. There were a few of Gregoire’s governor staff, all of them told me over and over again that they were on vacation.

This isn’t any different from other campaigns. Dino Rossi has his cadre, his bunch of folks who follow him around.

Two of my favorite guys on the bus are these guys. I missed their names, but the fella on the right is a local leader of the association of black veterans. The Gregoire campaign has lots and lots of veterans supporting it. Even the First Gentleman, Mike Gregoire. He’s a Vietnam vet. The fellas in the picture below kept referring to me at “the main blogger man.” I tried to tell them I wasn’t, but they didn’t listen. 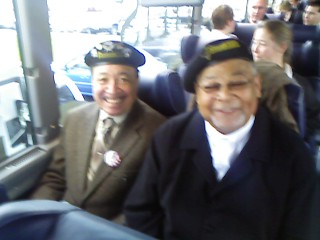