Tonight on “The David Goldstein Show” on Newsradio 710-KIRO, from 7PM to 10PM:

7PM: Is John Edwards a faggot? That’s what cuddly, conservative pundit Ann Coulter said at the annual Conservative Political Action Conference (CPAC) conference, where she was the featured speaker:

“I was going to have a few comments on the other Democratic presidential candidate, John Edwards, but it turns out you have to go into rehab if you use the word ‘faggot–so….’” 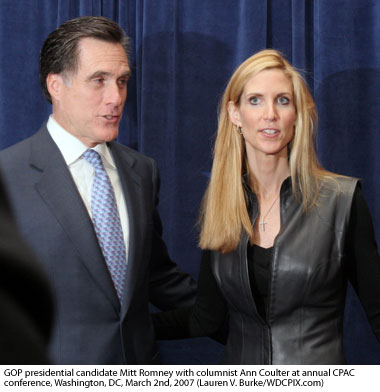 8PM: Should Reichert and McMorris give back their terrorist money? 22 Republicans representatives have benefited from money the NRCC raised from indicted terrorist financierAbdul Tawala Ibn Ali Alishtari — including WA’s Dave Reichert and Cathy McMorris-Rogers — and yet none have offered to give the money back. Republicans talk tough on terrorism, but I guess even a federal indictment doesn’t make your money not good enough for the NRCC.

9PM: Is it wrong to boo? Apparently.