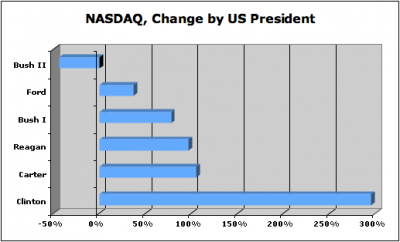 After a wild ride in which it opened with a 700 point slide, the Dow see-sawed back and forth, eventually closing down only 128 points.  So rather than redoing yesterday’s chart to reflect the decrease in the Bush-era return from -19% to -20%, I thought I’d take a stab at charting the NASDAQ, which actually closed slightly up today.

Let’s hear it for our “CEO President.”