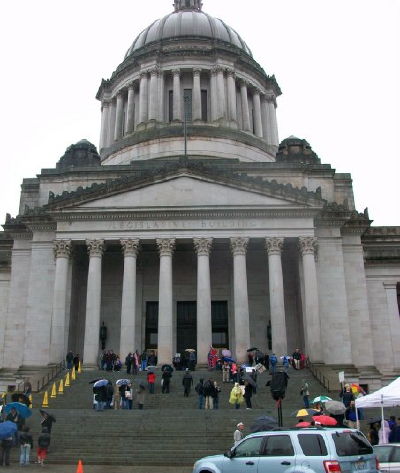 You know that huge teabagger rally in Olympia yesterday… the one which spooked the GOP caucus into introducing a bunch of crazy-ass bills based on bizarre, tentherist bullshit? Well apparently, the only thing that can stop loyal patriotic Americans from defending the Tenth Amendment against the threat of Obamunist oppression is a little rain.

Frightened Republican legislators expected thousands to rally on the steps of the state Capitol yesterday, as evidenced by the dozen porta-potties set up to accommodate the nonverbal excrement they spew, but according to local observers the much publicized rally attracted little more than a hundred angry, deluded righties… maybe two hundred, tops.

That’s some populist revolt the righties have going for them. And yet, they managed to dominate the Republican agenda for the current legislative session. Go figure.