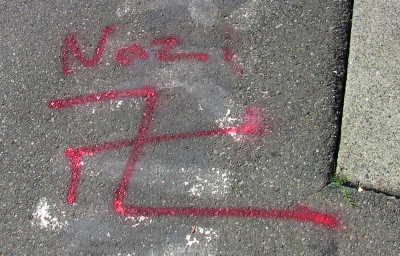 Sometime last night vandals spray painted swastikas on the sides of two Seward Park synagogues, on the driveway of one, and on the sidewalk in front of several neighboring houses. Seattle Police are investigating the graffiti as an act of malicious harassment and property damage, and encourages anybody with information to call their Bias Crimes Unit at 206-233-3898.

I live about a block from both synagogues, Sephardic Bikur Holim and Bikur Cholim Machzikay Hadath, and while I don’t remember another incident quite like this in the 12 years I’ve been in the neighborhood, as my own comment threads regularly demonstrate, anti-semitism is alive and well around these parts. Still, this attack seems oddly random, with nothing obvious in the news at the moment to serve as an immediate motivation.

That said, since history has shown that folks don’t need any particular reason to hate Jews, I guess it doesn’t take any particular motivation for these same folks to express their hatred.