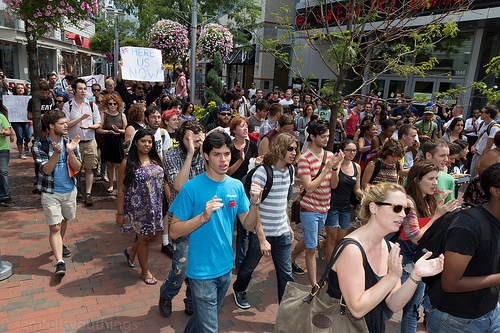 COLUMBUS, Ohio – Students from across the country marched from Ohio State University Student Union to President Obama’s campaign office to hold a press conference yesterday, calling into question the injustices of our current economic and political system. In an era where our political process is gridlocked by the influence of money and corporate power, our society has systematically diverted resources from the bottom to the top to fund a frenzy of profit seeking.

The demonstration highlighted how our electoral system and politicians have failed our youth on the critical issues of education, gender equality, racial justice, environmental sustainability, and basic respect for human rights. Neither party has the audacity to confront these injustices, nor do they attempt to facilitate any type of connection with us on these issues, which disproportionately affect women, LGBTQ people, youth, and people of color.

Akin Olla, an organizer from New Jersey, states: “It is important to recognize that not only are racism and discrimination against people of color still present in the United States, but they are playing a huge factor in the future for the youth of color by limiting our access to education, personal liberty and the right to feel safe in our own communities.”

Although women and LGBTQ people have won notable gains in recent years, Raquel Valesquez of Arizona gets to the heart of how the current system is one of structural inequality: “As we speak, women and LGBTQ people are refusing to accept the old idea of what our rights should be and are demanding change towards the true needs of our communities. As we are denied security in the workplace and safety in the streets; as our survivors of violence are blamed for their traumas while perpetrators are excused; while the state tightens its grip on our bodies through criminalization, incarceration, and abortion bans, we demand more than the right to military and marriage.”

Along with gender and sexuality injustice, we have learned that no matter who we vote for, we cannot avoid the controlling interests of corporations such as Goldman Sachs and Exxon Mobil dominating our political process. The corporate framework dictates infinite growth and accumulation of profit no matter what the environmental and human costs are. Tabitha Skervin of Michigan State University sums it up by saying, “You can preach economic growth all day but there are no jobs on a dying planet.”

The United States currently maintains a massive military machine responsible for the inhuman attempt to maintain and increase domination over the planet. We are outraged that more than $1 trillion of the annual federal budget is allocated towards sustaining the military-industrial complex instead of socially beneficial services such as accessible education. Within our borders, youth are growing up in a militarized society. The United States military targets low income and youth of color with manipulative promises of enlistment being the doorway to education and enrichment. We do not condemn individual soldiers whose bodies becomes tools of the state, used and then discarded to suffer untreated from the traumatic consequences of their service. Aislinn Bauer from New York City states, “We believe that the massive expenditures of taxpayer money should be redirected towards enhancing socially beneficial services like accessible education rather than furthering the interests of multinational corporations such as Big Oil and agribusiness and monitoring and criminalizing our own population. Money for jobs and education, not for war and occupation!”

We are now raising our voices to join the rallying cry of student movements across the world, addressing common global grievances, and resisting a system that does not serve the majority of us. Noting that access to higher education has become increasingly out of reach for much of the population due to skyrocketing tuition and burdensome loans, Lainie Rini of Ohio State University compares our education system to a factory: “Our current education system denies anyone but the privileged access to quality education. It is farming students for profit rather than being a space for inquiry and thought.”

The current situation has demonstrated that we cannot passively depend upon our leaders to save our society. We call for American youth to take action much like students across the globe in places like Quebec, Mexico, Chile, Spain, and Puerto Rico, who are mobilizing to demand their rights. Democracy cannot exist without demonstration and debate in public spaces. This fall, regardless of where we lie on the political spectrum, it is crucial that we come together on campuses across the country to reclaim our future before it’s too late. Join us November 14th-21st as part of a global week of student action, demonstrating that we in the U.S. are committed to global justice and the international student movement. Here. Us. Now.