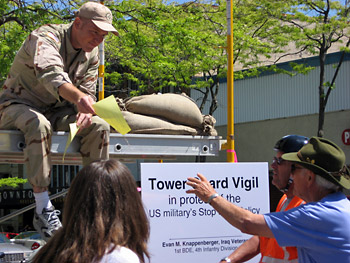 Standing Tower Guard on a 6′ scaffold at the Federal Building in downtown Bellingham, Iraq Veteran Evan Knappenberger, 1st BDE, 4th Infantry Division, started a week-long vigil on June 1st to draw attention to the US military’s STOP-LOSS and INACTIVE RESERVE policies, which he submits are being used as a substitute for conscription in a political war.