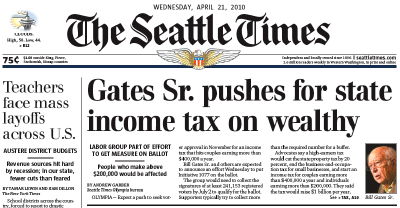 A minor adjustment to the layout of today’s Seattle Times front page shows exactly why Initiative 1077’s proposed high earners income tax is going to do a helluva lot better at the polls than the conventionally wise expect, for while the Times chooses to put the tax in bold, above-the-fold type, most voters are at least as concerned with the potential for mass teacher layoffs as they are with protecting the wealthy from higher taxes.

Yes, I-1077 would raise taxes on the top 3 percent of households, but the rest of use would see a tax cut: $160/year for the average King County homeowner. And while yeah, the wealthy are an important part or our economy, I-1077 would actually improve the business climate in our state by exempting 80 percent of businesses from the B&O tax, while reducing B&O taxes on another 10 percent.

But just as importantly, I-1077 would raise an additional $1 billion a year, dedicated to education and health care, two sectors that have endured enormous budget cuts over the past two years.

Nobody likes to raise taxes, but this measure isn’t being run in a vacuum, and given the choice between further underfunding K-12 education and adding a little progressivity into our tax system, I’m guessing an awful lot of voters are going to choose the latter.