The city of Tacoma has decided to crack down on its medical marijuana dispensaries. There’s an ongoing debate about the legality of dispensaries in this state, and Chris Legeros explains it well right here:

The city’s claim, detailed in a letter sent out to the co-ops last week, is that the co-ops are acting illegally by dispensing marijuana to more than one person. The city claims that under state law, a designated provider of medical marijuana can only help one patient at any one time.

“…In these businesses, that’s not the case; it’s a business supplying it to many patients,” said Rob McNair-Huff a city spokesman.

But Jay Berneburg, a lawyer for The C.O.B.R.A. Medical Group, one of the co-ops targeted by the city, has disputed that claim and said the co-op is complying with both the letter and the intent of the law.

Dispensaries around the state have been relying on this creative interpretation of the law in order to operate, but after a review, Tacoma warned eight such establishments in the city that they’re breaking the law and will be shut down. In response, there’s a rally planned this evening outside the Tacoma City Council meeting. I’m planning to head down there shortly and might update this post later with additional info and/or photos.

UPDATE: There are about 100 protestors here, along with some news media. I spoke briefly with James Lucas from Tacoma Cross, a dispensary that opened in April and is under threat of shutdown.

His employees are here wearing their corporate logoed shirts. Lucas tells me that he’s licensed with the city to operate his business and he pays all federal, state and local taxes required of any business.

UPDATE 2: There are now roughly 200-250 protestors here and it appears that their presence has made a difference. Douglas Hiatt and other patient representatives just came out of the Tacoma Municipal Building and it appears that the city will allow the dispensaries to continue to operate until the legislature has an opportunity to fix the law in the next session.

UPDATE 3: The Weekly Volcano has a short write-up and photos here. Here’s a photo that I took from the rally: 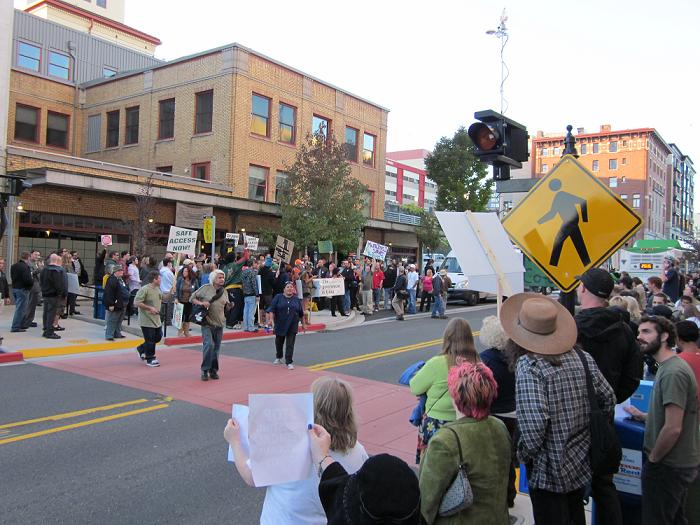