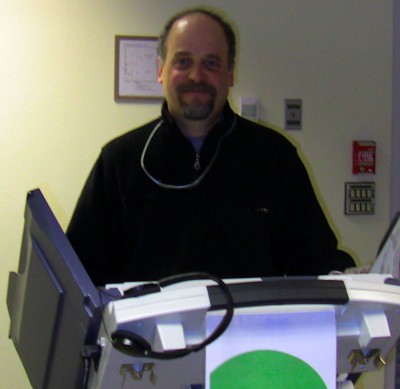 For the past 30 years I voted at a neighborhood church. As years went on, more people I knew were voting absentee, though they weren’t absent from the city. They were just absent from the polling station.

Lazy people. I thought it was a bad idea to make it easy for lazy people to vote.

Right. And it’s urban liberals like me who are accused of being elitist.

Like Ramsey, I too prefer the communal experience of going to the polls over the private clerical task of filling out and mailing in an absentee bailout. So much so, that I chose to drive down to King County’s “accessible voting center” in Tukwila today, to check out the touch screen voting machines, and cast my ballot in person. The service was fast and friendly, and I found the printed receipt reassuring, though the machines were considerably less intuitive than a paper ballot.  During my ten minutes there I saw two elderly voters ask for help.

But that’s neither here nor there. The point is, if Ramsey is such a dedicated poll voter, he too could have chosen to back up his words with action, and vote in person. But I guess he was too busy. Or lazy. Or whatever.

Still, it’s not really for me to judge Ramsey’s preferred method of voting, and certainly not for me to suggest that it’s a bad idea to let people like him vote, just because they’re unwilling or unable to put the same amount of effort into the process as I do.