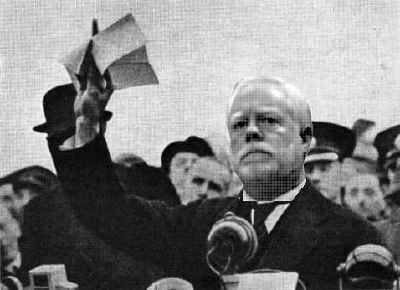 Seattle Times Publisher Frank Blethen waving the piece of paper upon which Chinese Minister of Industry and Information Technology Li Yizhong promises only to persecute dissidents "a little."

As tough as I am on them, I have to admit that the Seattle Times editorial board is usually pretty good on issues involving free speech. Unless, of course, it’s spoken in Mandarin.

GOOGLE’S fight with China presents issues that are not as simple as many Americans believe.

Americans frame it as a fight against state censorship — of government telling a U.S. company to disable its search engine in China so that Google’s customers there can’t read certain political opinions. Americans don’t believe in doing that — and Google’s CEO, Eric Schmidt, has said so publicly, threatening to leave China.

To China’s government, the issue is whether a foreign corporation will obey its laws. Framed that way, the answer is easy. It has to obey. That is the rule with foreign companies everywhere.

Well, the law is the law. Spoken like a Mahatma Gandhi or a Martin Luther King Jr… you know, if they were drunk.

And on what does the Times base this bold statement of principle? Well apparently they looked the communist Chinese minister of industry and information in the eye and were able to get a sense of his soul. After all…

Listen to what they say.

“I hope Google will abide by Chinese laws and regulations,” says Li Yizhong, minister of industry and information technology. This is not the diction of a totalitarian state. It sounds like a man who wants to make a deal.

Now that’s the sorta confident assessment of a foreign government’s character and intentions that would make Neville Chamberlain proud. I mean, with totally non-totalitarian diction like that, where’s the harm in a little censorship?

I dunno, but is anybody else a little weirded out by an American newspaper defending government censorship, while urging the world’s largest Internet search engine to just quietly play along? Strange.