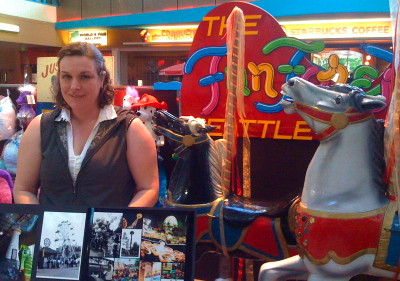 Lost in the debate over how best to use the remaining two acres of Seattle Center’s Fun Forest is the fact that the site is already home to a popular, rent-paying, job-producing attraction: the, um, Fun Forest.

Yeah sure, I know the hipsters and aging hipsters and yuppies and cultural elitists who dominated last night’s hearing all look down their nose at kitchy amusements and carnival rides, but since the opening days of the 1962 World’s Fair, the Fun Forest has been as much a part of the Seattle Center as the Space Needle that looms above it. And the family owned business that runs it is in no rush leave; they’d love to secure a long term lease, but they’re happy to operate on a year-to-year basis if that’s what works best for the city.

Much was made last night by Chihuly proponents about how their proposal is the only one that won’t require a public subsidy, but even in its reduced footprint, the Fun Forest is already producing about $250,000 a year in rent, taxes and concession fees, while employing 30 people in season. So honestly, what’s the rush?

I know the Fun Forest doesn’t fit into the Master Plan that calls for its removal, but neither does a paid-admission, for-profit glass gallery/gift shop/catering hall. And since it’s already producing revenues while providing residents and tourists a much needed family-friendly amenity, what’s the harm in leaving it in place for another year while we get to have a real public debate about the best use for the site? I mean, it’s not like it’s a vacant lot gathering abandoned cars or homeless encampments. It’s the Fun Forest for chrisakes. Kids love it!

I’m told the Wright family is a bit insulted by the city’s failure to embrace their proposal, and have threatened to pull out if a deal isn’t signed soon. But surely, if Ye Olde Chihuly Shoppe makes such good business sense to them now, it would still make good business sense a year from now, so it’s hard to take such hardball tactics seriously… especially when the guaranteed revenue from their paid admission “museum” isn’t all that much higher than what is already being generated by an attraction that has catered to Seattle families for two generations.

Yeah, I know… it’s hard to take something seriously when it has the word “Fun” in its title. But for all the arguments for and against the Chihuly proposal, I’ve never heard anybody attempt to explain what is so godawful about the status quo.