A story I first broke back in August continues to gain momentum, with the Everett Herald devoting a large chunk of their front page yesterday to the plight of the residents of the Cedar Springs Bible Camp. The residents — mostly retired ministers, missionaries and church workers — built permanent homes on land leased from the Bible Camp, but now face eviction at the hands of Pastor Joe Fuiten, who recently took control of the board.

The politically connected Pastor Fuiten has become an influential player in the Washington State Republican Party, using his Cedar Park mega-church as a platform for promoting right-wing causes and candidates. He is a close advisor to US Senate candidate Mike McGavick, serving as an original member of his exploratory committee, and giving the invocation at his campaign kickoff. Fuiten is also a fierce opponent of gay civil rights, and promises another effort to repeal the state’s anti-discrimination laws.

Fuiten, who normally craves the media spotlight, seems a tad annoyed at the unwelcome and negative press coverage he’s been getting.

“That’s part of what fries me about these yahoos out there when they accuse us of not being interested in the poor,” Fuiten said. “We bless them with an inexpensive place to stay and they call us all kinds of names in the media.”

For the record, here’s one of those “yahoos” Fuiten is fried at: 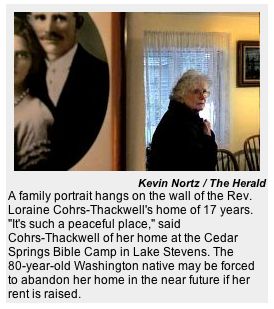 Pastor Fuiten called this 80-year-old retired minister a “yahoo.” Hmm. That’s not very Christian of him.

Well, at least he didn’t call her a “Christian-hating Jew and homosexual.” (I believe that particular epithet was aimed at me.)

The lease dispute centers on Fuiten’s refusal to include an automatic renewal, a provision the residents have enjoyed for the past 40 years, and without which their homes become worthless. If Fuiten truly is interested in the poor he would find some way to accommodate elderly retirees like Rev. Cohrs-Thackwell, who has devoted her entire life to serving the same Assemblies of God denomination that Pastor Fuiten claims to represent.

And he better come to an accommodation quick, because this story is not going away. The residents now have competent legal representation, and are prepared for a battle of attrition. And the further the local media delve into this dispute, the further they will delve into Pastor Fuiten’s tangled web of financial and real estate dealings.

So to all my friends in the press who haven’t yet looked into this slowly unfolding scandal, I encourage you to take a gander. There’s plenty of story here to go around.