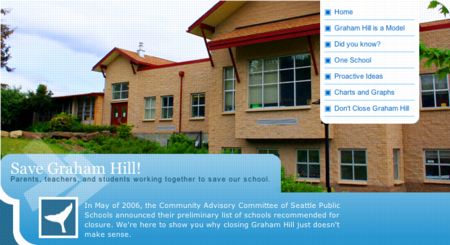 I have been writing a lot about my daughter’s elementary school, and will continue to do so for quite some time. But I’m not the only one.

My fellow parents at Graham Hill Elementary have joined together to do an incredible amount of research, analysis, creative thinking and community outreach in our effort to save our school from closure. Some of this is now available online at our new website: SaveGrahamHill.com

This new website is not only a terrific introduction to Graham Hill, it is also a demonstration of how integrated we are into the surrounding community, for it is actually the creation of Chandra Inouye, who is not (yet) a Graham Hill parent. Her daughter is only 18 months, a year and a half shy of our unique, Montessori Pre-K program.

My deepest thanks to Chandra for this tremendous gift.