Rick Santorum has identified the true problem with America. He is launching his own crusade to stop the spread of Medieval smears (via Politico):

Rick Santorum launched into a scathing attack on the left, charging during an appearance in South Carolina that the history of the Crusades has been corrupted by “the American left who hates Christendom.”

Really…it’s about time somebody had the cohoes to not just attack, but to launch into a scathing attack on the evil leftist, Crusade-hating, eleventh through thirteenth century history revisionist element in our society.

“The idea that the Crusades and the fight of Christendom against Islam is somehow an aggression on our part is absolutely anti-historical,” Santorum said in Spartanburg on Tuesday. “And that is what the perception is by the American left who hates Christendom.”

I know!!! I can’t tell you how often I’ve had to correct Christendom-hating leftists on their shallow understanding of the crusades. Their ignorance of the benevolent nature of the Crusades is leaving its stain on America. 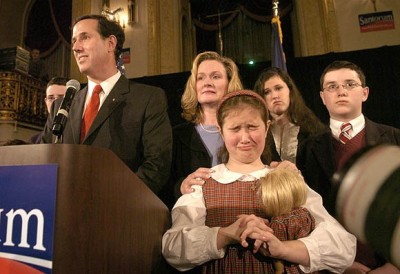 I mean, it’s no wonder Congress has been unable to pass a budget. And that so many Obama appointees are stuck in the Senate confirmation process. Crusade confusion has caused banks to fail. And some say it played a big role in the Enron scandal.

He added, “They hate Western civilization at the core.”

An no greater an expression of hate is there than the spread of misinformation about the Crusades. Thank you Mr. Santorum for cleaning up that stain.

That, and The Scientists’ pernicious work on human-animal hybrids….

This guy is sooooooo, sooooooo totally ready for the Oval Office!