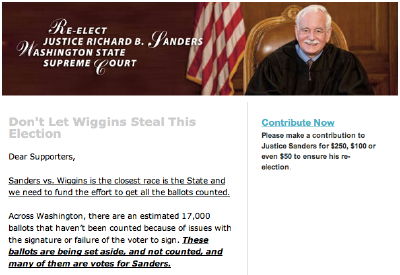 From an email sent by Sanders to supporters

How bad do the numbers look for incumbent Supreme Court Justice Richard Sanders? Well, he just sent out an email to supporters accusing his opponent, Charlie Wiggins, of trying to steal the election… which these days has kinda-sorta become the Republican equivalent of a concession speech.

Huh. I wonder if this contest ultimately gets settle in court, if Sanders will follow Dino Rossi’s lead, and decline to appeal due to the partisan makeup of the State Supreme Court?

Of course, the absurd thing about this accusation is that Wiggins is not black, and as Justice Sanders will tell you, only black people steal things.

That said, Wiggins supporters should pay close attention, and not let Sanders’ efforts at post-election GOTV go unchallenged. Sanders’ email claims that 17,000 ballots have not been counted due to signature issues, “many of them” for Sanders, and no doubt his goal is to canvass signatures from presumed Sanders voters. Sound familiar? That may have been the Democrats’ pivotal tactic in Gov. Chris Gregoire’s whisker thin victory over Dino Rossi in 2004.

So if Sanders and his supporters are out there canvassing signatures from pro-Sanders voters, the Wiggins folks better start planning to do the same, just in case his margin of victory isn’t as big as some project. After all this, we wouldn’t want Wiggins to lose the election simply by being out-hustled.