The Stranger announced its Political Genius awards today, and apparently, I’m not one. That’s okay. I don’t like cake. Besides, how could I possibly hope to compete with such tough competition? Hell, just look at one of the runners-up:

Political consultant Sandeep Kaushik, 60, displayed his first signs of genius in 2005 when he quit The Stranger, where he’d been a political reporter for three years.

King County Executive Ron Sims recognized Kaushik’s smarts and stole him away from us, hiring the dazzling Jim Beam drinker as an election strategist.

Kaushik is poised to cap his rise as a political whiz with two major campaigns: He’s advocating for the biggest tax increase in state history, the $17.8 billion Roads and Transit initiative (hoping to expand light rail with 50 new miles of track) and, in a prime-time spot, he’s heading up spin for Darcy Burner, the Democrat who’s trying to knock off GOP Eastside incumbent Congressman Dave Reichert. Kaushik already chased Burner’s Democratic primary rival out of the race.

In 2000, little-known consultant Christian Sinderman emerged as a star by helping get Maria Cantwell elected. Sinderman is now the hottest political guru in the state. If Kaushik sends Burner to Congress, he’ll be the new Sinderman.

No doubt Sandeep’s political instincts and media connections are fast making him a political powerhouse — as Postman well knows, Josh pretty much writes whatever Sandeep tells him to write. So why did Sandeep have Josh write him a measly runner-up citation instead of the big award?

Well really, who deserves to take home the cake more than Cary Moon, the woman who somehow took the idea of a surface alternative to the Alaska Way Viaduct from lunatic fringe to political consensus?

Moon’s political genius is her ability to see the long-term picture; when others laughed at her for supporting what many called a ridiculous, long-shot option (“But where will all the cars go?”), Moon ignored them. While leaders bickered over whether to replace the viaduct with a larger viaduct or expensive tunnel, Moon quietly bided her time, consciously threading the needle between the two opposing positions. Over time, she gained the confidence of opinion leaders such as Council Member Peter Steinbrueck, an environmental advocate who saw the surface/transit option as a way to save billions and improve the climate in the bargain.

Then came last March’s vote against both waterfront freeway options. That “no/no” vote wasn’t just a defeat for the mayor’s tunnel and the governor’s bigger, uglier new viaduct. It was also a major victory for Moon and others who supported the surface/transit option, which emerged as the most affordable, environmentally sustainable option, and the officially “preferred” option of both the mayor and the city council and all the current council candidates.

Of course, there could be one more reason for Cary’s triumph over Sandeep: 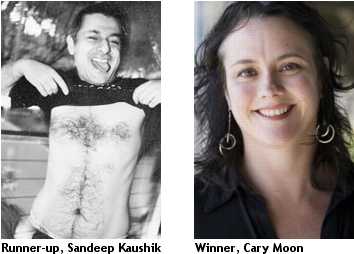