Lost in the hoo-hah over the opening of light rail this weekend, was a bit of tangentially transit related news that will have a huge impact on the quality of life for thousands of South Seattle residents: Safeway’s reversal of plans to shutter their aging Othello ST store, and instead invest $3 million in a long needed remodel.

In a saga that has long been chronicled on the Rainier Valley Post, Safeway had not only planned to close the store, but had put the property up for sale with a deed restriction that would have prevented future owners from bringing in a grocer, pharmacy or gas station. This was not only a cynical and self-serving effort to push customers to Safeway’s two other, much newer and much larger South Seattle locations, it would have been a devastating blow to a community whose redevelopment had focused on making it a walkable neighborhood.

The Othello Safeway is part of a retail complex located at the NW corner of MLK Jr. Way and S. Othello ST, just across the street from Link’s Othello ST Station. It is also conveniently nestled at the foot of the hill leading up Othello to the New Holly development, and just to the north of the not yet completed Othello Station residential development along MLK Jr. Way. This makes the Othello ST Safeway not just the only supermarket within walking distance of thousands of new, mixed income houses, townhouses and apartments, but also the closest supermarket to any of the stations on Sound Transit’s new Link light rail. And with proximity to a full-service grocery store one the most crucial factors in determining the ability of low income households to maintain a healthy diet, Safeway’s remodel, including expanded meat, seafood, produce and organics sections, will prove a boon to the entire community. 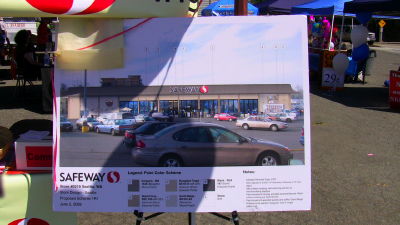 To its credit, Safeway apparently heard community complaints, and set up a booth at Saturday’s Othello street fair to trumpet the remodel to the crowds showing up to celebrate the opening of light rail. The $3 million refurbishment is perhaps less than Safeway has invested in other neighborhoods, and the store will still remain one of the chain’s smaller and more cramped local outlets in this age of modern megastores (certainly compared to its roomy, Rainier Ave. cousins), but it is welcome nonetheless. Whatever the motives and economics (such as the two, large developments planned for the Eastern side of the intersection, which might have included a competitor’s store had Safeway moved out), Safeway’s remodel can only be considered an act of responsible corporate citizenship, whereas its prior plans to sell the property with a deed restriction would have epitomized the opposite.

Those who judge light rail by mere ridership numbers miss the point; rather than just getting commuters from home to work and back, the goal is ultimately to help create a more walkable city where residents drive less, not because they have to, but because they are simply less dependent on their cars. And no neighborhood is truly walkable without easy access to healthy and affordable fresh groceries and produce.