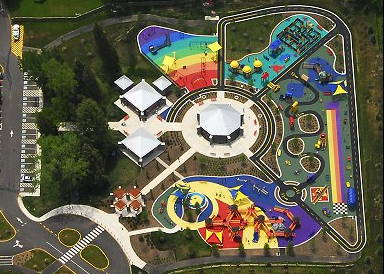 Nothing against Dale Chihuly, or museums in general, but I was deadly serious the other day when I proposed a kick-ass playground to replace the Seattle Center’s soon to be closed Fun Forest, instead of the lovely, respectable, and inevitably kid-unfriendly look-don’t-touch museum that appears to be the favorite of city planners. And I sure do hope that council members and civic leaders take my proposal seriously.

The Seattle Center has long been the number one family destination in a downtown that, let’s be honest, isn’t exactly family-friendly. There are no K-12 schools in downtown Seattle, no athletic fields or basketball courts or other youth-oriented amenities. And little in the way of playgrounds, kick-ass or otherwise.

And yet if we want to build the kind of downtown urban density necessary for our region to grow sustainably into the 21st century and beyond, then we’re going to have to do something to keep couples from moving out into the suburbs the minute they pop a bun in oven. And, well, replacing a virtually unique, downtown amusement park with a pay-to-view glass museum doesn’t exactly strike me as a move in the right direction.

A playground on the other hand — a really kick-ass playground — would not only provide a desperately needed family amenity, but would be entirely in keeping with the spirit and heritage of the Seattle Center, which from its very inception has always been a destination for families seeking diversion and amusement.

And don’t be so limited in the scope of your imagination to believe that a mere playground can’t be as much of a tourist attraction as a Chihuly museum. I’m not talking about a couple of jungle gyms and a seesaw here; think of it as a one-acre canvas for showcasing the inventiveness, creativity and yes, playfulness of our city… perhaps a gigantic, multi-level Rube Goldberg contraption filled with running, joyful children.  I mean hell, if something as inherently boring as a library, for chrisakes, can be reimagined into an instant architectural landmark and cultural icon, then so can a playground. You know, a really, really kick-ass one.

Seattle’s civic leaders should stop trying to prove how grown-up we are by matching older, East Coast cities museum for stodgy museum. A) We’ll never do it; and B) being a grown-up is way overrated. Instead, let’s unleash the inner child in all of us and build something that no other downtown in America has: the most amazing, jaw-dropping, joy-inspiring, kick-ass public playground any child or adult has ever seen.