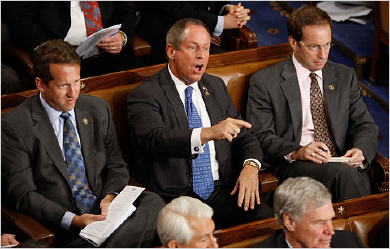 A lot of you have probably already seen the photo of Rep. Joe Wilson (R-SC) heckling President Barack Obama, but did you notice that carefully coifed head of silver hair just beneath him? Why that’s Rep. Dave Reichert (R-WA) of course.

And apparently, Reichert isn’t just close to Wilson in terms of physical proximity. A quick search of OpenSecrets.org finds Reichert has received three contributions totaling $5,000 from Wilson, via his Carolina Majority PAC.

So considering his close relationship with Wilson, I’d be curious to hear what Reichert has to say about his patron’s inappropriate outburst, and whether he too believes that President Obama “lied” in stating that his plan would not insure illegal immigrants?

UPDATE:
You know what else Reichert and Wilson have in common? The uncommon ability to inspire unprecedented generosity… for their opponents. Since heckling the President last night, over 10,000 individuals have contributed over $350,000 to the campaign of Wilson’s challenger, Rob Miller, over $179,000 of it coming via Daily Kos alone, prompting elections analyst Charlie Cook to downgrade Wilson’s reelection prospects.

Send a few bucks of your own Miller’s way, and send a very loud message back to Rep. Wilson.