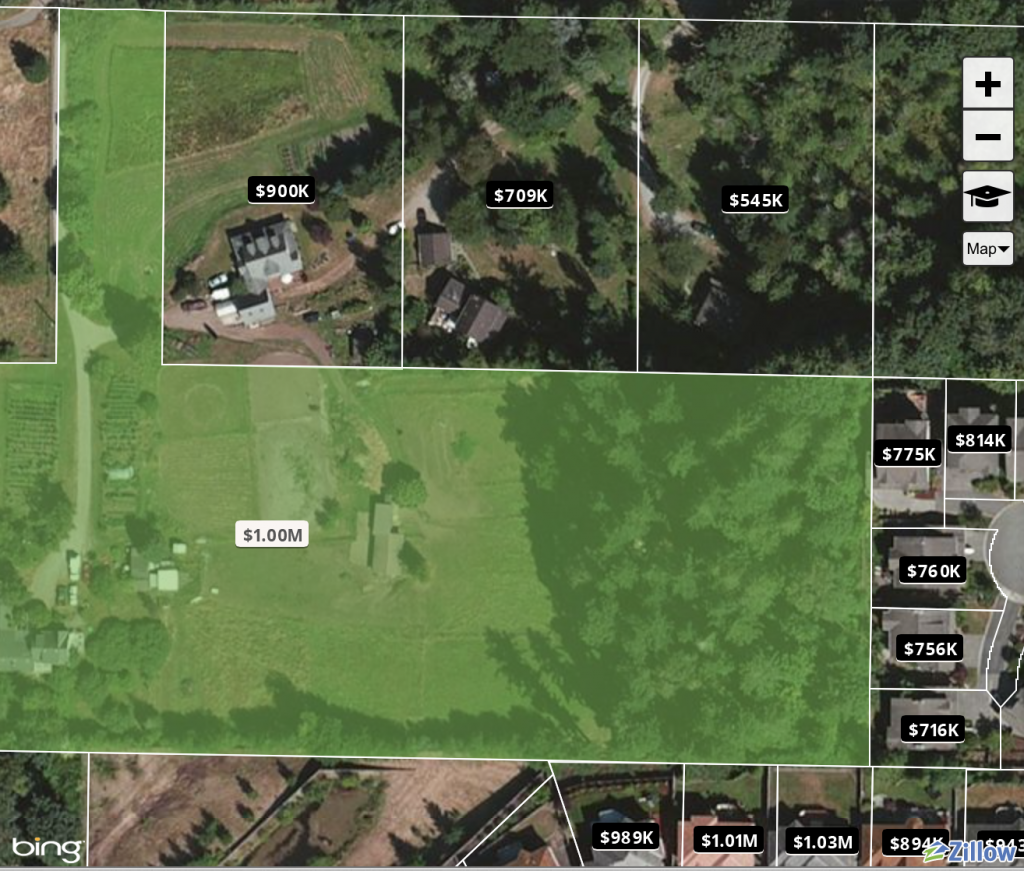 Screenshot from Zillow of the McBride “Farm”

I know, I know, some people just won’t link to a post with too many f-bombs in it, so for you faint of heart, here’s a non-foul-mouthed take down of what has got to be one of the most dishonest Seattle Times editorials ever. Which is saying a lot. Because the Seattle Times has an impressive track record of dishonest editorials.

NEWS that the last family farm in Issaquah is being sold for residential development is a reminder of one of the subtle ills of our tax system: a death tax that forces many farm families and business owners either to liquidate their assets, or go through enormous and costly gyrations to avoid it.

The story of the McBride family, recounted by Seattle Times reporter Erin Heffernan, shows us what we lose as a result of the estate tax — in this case, the last working farm in a fast-growing suburb. Twelve acres of open space farmed by a single family since 1883 will soon become a subdivision. The family had to sell, explained Jim McBride. “There wasn’t any other thing for us to do. All my parents’ wealth was in that land, and we couldn’t afford to pay the taxes that come with inheriting it at the current property value.”

Credulously read this Seattle Times editorial, and you would think the McBride family was forced off the land of “the last working farm” in Issaquah thanks to the death of their patriarch and a stupidly punitive estate tax. Except, everything about this editorial is wrong:

You wouldn’t know any of this from reading the editorial. Because the editors don’t want you to know it. But let’s be clear, the McBrides did not sell the family farm to pay off an estate tax.

First of all, the federal estate tax exempts the first $5.25 million. So if, as Jim McBride is quoted, all his parent’s wealth “was in that land,” and they sold the property for $4.5 million (as the Seattle Times reports), then there would be no federal estate tax to pay. The US Department of Agriculture reports that only 0.6 percent of family farms end up paying any estate tax. And thanks to other provisions benefiting farms, such as a special use valuation and a 15-year payment plan, the Center on Budget and Policy Priorities estimates the number of family-owned farms forced to liquidate to pay the federal estate tax at “virtually none.”

But what about that pernicious Washington estate tax? Here’s what the Seattle Times has the audacity to tell its readers:

Washington state’s tax is especially punitive. The rate of up to 20 percent is the highest in the country — on top of a federal rate of 40 percent. The typical state exemption for the first $2 million of estate value is hardly enough for a farm or prosperous business, despite reforms by the 2013 Legislature.

Except, Washington state law exempts the value of working farms entirely. All of it. If this had been a working farm for five out of the past eight years, then the McBrides would inherit it Washington-estate-tax-free, whatever its value. No exceptions. Hard to see what is “especially punitive” about that.

Of course, as I’ll explain in a moment, the McBride property is likely not a working farm. Not that it matters, because 97-year-old Ralph McBride’s land holdings comprised only a portion of the $4.5 million deal, far below the $2 million threshold for non-farm assets subject to Washington’s estate tax.

It didn’t take more than a few seconds on Zillow to locate the four properties the extended McBride family sold to developer Wescott Holdings—here, here, here, and here—and according to the King County Assessor’s Office only one property was still owned by Ralph McBride, a 7.55 acre parcel with an assessed taxable value of only $666,000. The other lots were already owned by Ralph’s heirs.

“All my parents’ wealth was in that land,” Jim McBride told the Seattle Times. So a tiny bit of fact-checking would have demonstrated that Ralph McBride’s estate couldn’t possibly be subject to either the state or federal estate tax, regardless of its classification. If anything, the family increased their chance of paying the Washington estate tax by selling his property at a premium before his death (though I’m guessing the deal is structured in a way to avoid this).

So why did the McBride’s sell the farm? Here’s what they told the Issaquah Press:

Age, skyrocketing property taxes and nearby development caused the family to vacate the 660-acre [sic] section of land at the end of June, bringing an end to one of the final remnants of Issaquah’s rural past. … “The farm just kind of petered out as the development began,” [Celia] McBride said, referring to the build out of the Klahanie area in 1985.

Of course, the construction didn’t stop there. Residential neighborhoods sprang up to surround the farm, leading to complaints about noise from the animals and financial concerns.

“The property taxes became outrageous,” she said. “My dad got older, my mom got tired and now the land is going to be a development.”

The property tax on James McBride’s parcel was $7,575.38 for 2014. The McBride family’s combined tax bill was over $26,000 across the four properties. So, yeah, maybe they were just tired of paying it. Though looking at the parcels on Zillow, I’m guessing that the family got offered a premium to sell the four parcels together, rather than the per acre price they could have demanded for Ralph’s 7.5 acres alone. That’s the way these development deals often work.

Regardless, you can’t liquidate the family farm to pay the estate tax if you don’t have a family farm.

Look at the aerial map on Zillow. Two of the lots are heavily wooded, with maybe five or six acres of potential cropland between the four. According to the Agriculture Council of America, the average US farm is 441 acres, so it would be hardly viable to farm a plot this small in the midst of fast appreciating suburban developments. Indeed, King County characterizes all four parcels as “urban residential,” not “rural” or “agricultural,” and assigns “single family” as the properties’ “highest and best use.” The narrative in both the Seattle Times and Issaquah Press describes a 660-acre farm that was gradually divided and sold off over generations. Yes, Ralph McBride continued to raise chickens and tend a garden. But so do lots of people, and it doesn’t make them farmers.

The McBride property may in fact have been the last working farm in Issaquah—that’s hard to know for sure—but it clearly ceased to be a working farm years ago. So all Issaquah is really losing with the development of the McBride properties is some open space and a tiny fragment of its history. If you find this loss upsetting, blame the land use policies.

But what else can the estate-tax-hating Blethens do but lie to their readers? “The McBride case ought to show us conventional thinking is wrong — the death tax really isn’t a whack on the wealthy,” the editors blather. Yet according to the Urban-Brookings Tax Policy Center, 99.86 percent of estates owe no federal estate tax at all. So lacking an actual example of a family farm or small business being liquidated to pay off the estate tax, the Seattle Times had to cook one up.

How can anybody ever trust anything this editorial board writes?