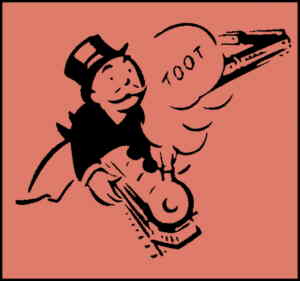 Seattle Transit Blog’s Ben Schiendelman dares to suggest that Kemper Freeman Jr. opposes light rail through downtown Bellevue because he doesn’t want lower-income rail-riders driving away the “high-class clientele” at Bellevue Square and his other ritzy properties… an assertion that has Freeman’s nursemaid’s undies in a knot:

But Bruce Nurse, vice president of Kemper Development, says, “It’s very presumptuous of Mr. Schiendelman to speculate on Kemper Freeman’s market philosophy. Kemper Freeman has always welcomed the region’s residents and visitors to downtown Bellevue… regardless of age or income.”

Really? Huh. Speculating that Kemper Freeman fucks goats, now that would be presumptuous (although I have my suspicions), but categorizing Freeman’s market philosophy as somewhere to the right of Rich Uncle Pennybags, well, that’s about as speculative as predicting a Seattle Times editorial endorsement. (November, 2012: “Rob McKenna for Governor; a different kind of Republican.” You mark my words.)

I mean, honestly, a downtown Bellevue light rail alignment would bring thousands of additional customers a day to Freeman’s high-rent properties, so as a businessman, why the hell wouldn’t he want a stop as nearby as possible? Unless, of course, light rail would bring the wrong kind of people. You know, poor people. And by that, I mean people of color.

Oh, I’m sorry, am I being presumptuous?

Maybe, but it’s not like Kemper Freeman’s own personal fortune wasn’t built upon the vicious racism and ruthless, um, market philosophy of his grandfather, Miller Freeman.

That same year, Freeman began to take an interest in Japanese- American relations; i.e., Americans should understand that Japanese “yellow” clashed with red, white, and blue. Until his death in 1955, Miller Freeman avidly pursued his anti-Japanese obsession, and his Eastside real estate business grew as a direct result.

Freeman owned several newspapers, including the Bellevue American and Town Crier, and used them as vehicles for his racist blather. “Japanese population and power in the western Unites States is increasing at a sure, accumulative rate,” he once said, “which will inevitably give the white man his choice between subjugation and retreat.” As the president of the Anti-Japanese League of Washington, and as a Washington state legislator, he led a campaign that culminated in the passage of the Alien Land Law of 1921, which forbade people of Japanese descent from owning land– or even leasing it. Shortly thereafter, Freeman began buying up cheap land on the Eastside, formerly home to thousands of successful Japanese farmers. In 1925 he bought land in Medina; three years later he moved his family into a new mansion there.

After Pearl Harbor, Miller Freeman saw another opportunity to screw over Japanese Americans, and make a profit, too. He went to Washington, D.C, to urge the Tolan Committee to lock up people of Japanese descent. And he kept up his racist rantings in his newspapers, calling the Japanese an “insoluble race” bent on “infiltration.”

With Japanese Americans tucked away in internment camps, Freeman was able to reap the full benefits of the new Mercer Island Floating Bridge (which he had lobbied to have built, and which opened in 1940). The Eastside, cleansed of its Asian-American population, was now safe for white businessmen, largely due to the efforts of Miller Freeman. His son, the first Kemper Freeman, built the original Bellevue Square, after convincing his father to buy a piece of land along 104th Avenue Northeast.

Yeah, I know, sins of the father and all that, so I wouldn’t want to be so presumptuous as to suggest that Kemper Freeman Jr. holds any of the same anti-Japanese sentiments as his beloved grandfather. But even if Freeman’s staunch opposition to a downtown Bellevue light rail alignment has absolutely nothing at all to do with race, to suggest, as Freeman’s Nurse does, that he welcomes all of the region’s residents to downtown Bellevue, “regardless of age or income,” just doesn’t hold up to Freeman’s own public statements:

“When you walk through the (Southcenter) mall, the way the customer dresses just to shop there — the light blue and pink hair curlers, the shoes that flop, flop, flop along — it’s a completely different customer,” said Freeman. “Yet we are 12 miles apart.”

Yup, about the only thing that separates Freeman and his upscale Bellevue Square from the curlers and flip-flops of déclassé Southcenter is 12 short miles. That, and about a half century of progress in Americans’ attitudes toward race.

The truth is, everybody knows that Freeman is a bit of an OCD, neo-Bircher nutcase with a Christ-like devotion to the automobile and a penchant for equating mass transit with communism (really), so isn’t it time that serious people started taking him and his anti-rail conspiracies at face value? Isn’t it time to call a spade a spade (so to speak)? I don’t mean to diminish Freeman’s standing as Bellevue’s (presumably) racist/classist, rich, crazy uncle, but is that really enough of a reason to give him a greater voice in our region’s transportation debate than folks like, say, Schiendelman, who, you know, actually know what the fuck they’re talking about?

And honestly, given Freeman’s shameful family history, is it really all that presumptuous to speculate that his dogged opposition to a downtown Bellevue light rail alignment might stem from something a little more than an informed position on transportation planning, or even mere economic self-interest? Am I really taking his words and deeds out of context by attempting to place Freeman in it?

As a native Philadelphian — a city where thousands of ordinary people lay themselves down to bed each night in houses that predate George Washington — I’ve always been struck by how folks out here in his namesake so easily forget our region’s own short history. I mean, it’s not like there’s all that much of it. Hell… I’ve tasted wine older than Bellevue.

No doubt Freeman isn’t our region’s only civic meddler whose family fortune was founded on land stolen from the Japanese-American families who broke their backs clearing it of old-growth stumps, but while it would be wrong to attempt to define Freeman solely by his family history, it would be equally wrong to ignore it when attempting to discern his political motives.

I suppose we could speculate that Freeman inherited nothing more from his grandfather than his dirty, tear-stained money, but… well… that would strike me as awfully damn presumptuous.