How does that compare to Seattle’s minimum wage? Well, it depends on who you work for: 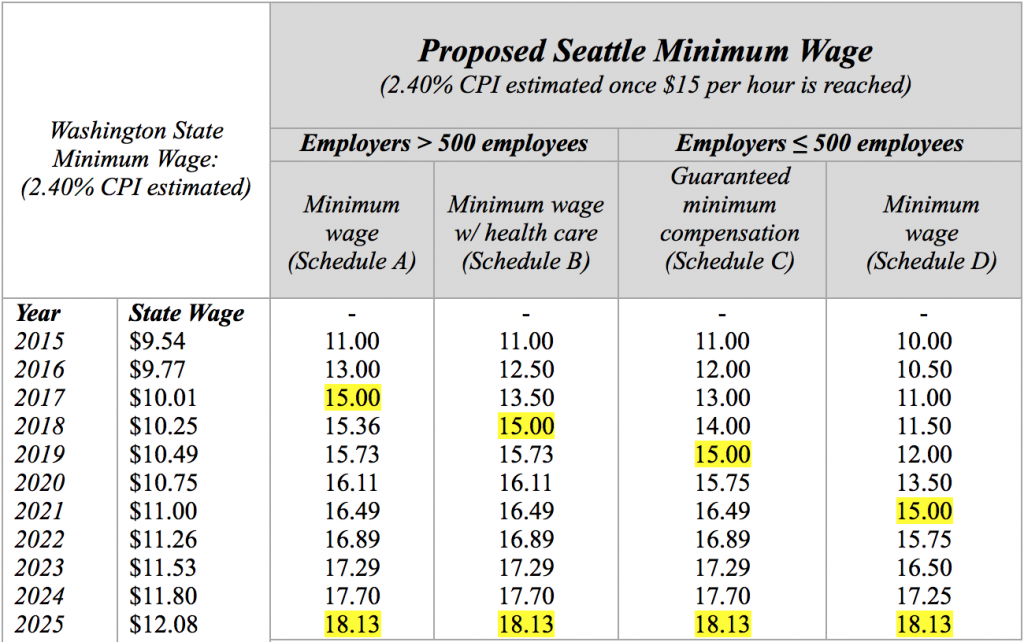 The commissioners’ proposal gets airport workers to higher wage and minimum compensation levels faster than Seattle workers at businesses with 500 or fewer employees. But in the long run it pays airport workers less than they would earn at a minimum wage job in Seattle. It’s also not clear whether this proposal applies to the concession workers in the restaurant and retail areas of the airport, or only those working in secure areas. (Update: only those with access to restricted areas are covered.)

San Francisco International Airport had similar job turnover issues before it instituted its highest in the nation airport minimum wage. It has since reduced its turnover rate from 110 percent a year to just 25 percent a year, says Reis.

After the presentations, the five port commissioners all congratulated each other on a job well done, so it looks like official approval of the proposal will be just a formality. “People who are working behind security lines in permanent positions deserve to earn a family wage job,” emphasized business-friendly commissioner Bill Bryant.

But whether or not it’s too little, too late, remains to be seen. On Thursday the Washington State Supreme Court will hear oral arguments in the appeal of a lower court’s ruling that SeaTac’s $15 minimum wage law does not apply to airport workers. If the court overturns the lower court ruling, not only will the workers immediately receive $15 an hour cash straight up, airport employers may be liable for millions of dollars in back pay.

SeaTac voters have already spoken on this issue. The State Attorney General agrees that the City, not the Port, has jurisdiction on setting wage standards for people working inside their city limits. We’re looking forward to the hearing on Thursday.

UPDATE, UPDATE: For your reading pleasure, a copy of the commission’s draft resolution (pdf). Note that it’s in the form of an addendum to the appellate case being heard on Thursday, which supports the conclusion that this resolution may be more a legal maneuver than anything else.

Also of note is that the resolution only covers employees working in secure “Air Operations Areas” (so sorry, terminal concessions workers, not you), and that total compensation includes wages, tips, health insurance premiums, retirement contributions, and taxable educational expenses.