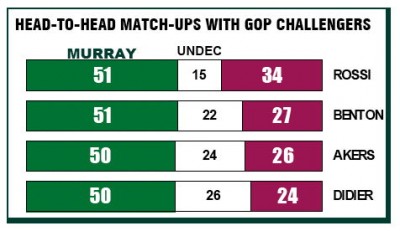 The latest Elway Poll shows Sen. Patty Murray with a comfortable lead over all rivals.

Last week KING-5/SurveyUSA had Dino Rossi leading incumbent Democratic Sen. Patty Murray by a stunning 52-42 percent, a margin both camps dismissed as an outlier. Well, now that the latest Elway Poll has Murray leading Rossi by an even more impressive 51-34 percent margin, it’s easy to understand the insiders’ reluctance to accept SurveyUSA numbers at face value.

SurveyUSA had Murray only garnering 73% of both self-identified Democrats and Liberals, and a paltry 46% of metro Seattle voters… unimaginably low numbers come November. By comparison, Elway found Murray enjoying the support of 92% of Democrats, and 73% of Seattleites.

Further, Elway examines Murray’s job performance ratings, a number often looked to as an indicator of electoral strength, and while incumbents never want to come in under 50%, Elway points out that “Murray’s ratings have historically been mediocre,” and that her current 48% rating falls only slightly below her 17-year average. So Republicans shouldn’t take much encouragement from that either.

What does this all mean for Rossi, who was widely expected to announce his candidacy by the end of April, and who we know to have had lengthy meetings and conversations with consultants and fundraisers in recent weeks? Well, there’s simply no strong evidence that Murray is quite as vulnerable as Republicans would wish her to be. Sure, this is just one poll amongst many, and the election is still a long ways off, but as Elway concludes:

The world is going to turn a few times before voters actually cast ballots, and campaigns make a difference. But no matter how these findings are sliced, Patty Murray appears to be in a formidable position.

No doubt Rossi is still getting a lot of encouragement to enter the race from the NRSC and the Republican consultancy class, even in the face of these daunting numbers, so I hope he takes seriously a bit of free advice from someone with nothing to gain from his decision one way or the other. Nobody has ever profited from underestimating Patty Murray… except, you know, the dozens of pollsters, fundraisers, consultants, media buyers and other political professionals who have made millions off previous failed attempts to unseat her, and who would make millions more off of your campaign.

Remember, politics is just as much a business as real estate, so don’t trust their salesmanship any more than you would trust your own.