So howz it doin’? A new Moore poll finds:

With just over a week to go before the November 5th general election, Washington’s Initiative 517, which concerns the initiative and referendum process in the state, is opposed by a narrow margin. After hearing the ballot question, 33% of voters plan to or have already voted “yes,” while 40% plan to or have voted “no.” The remaining 27% are undecided or wouldn’t reveal their vote.

Importantly, intensity is stronger on the “no” side – among those who have yet to cast their ballots, 21% say they are a “definite” no vote, while only 11% are a definite “yes” vote.

It sounds bad for I-517. But as SeattlePI.com’s Joel Connelly cautions:

Eyman initiatives tend to run better AT the polls than in the polls. The results on election day have sometimes surprised those who have predicted his demise. And, win or lose, Eyman is usually back with more measures as soon as the votes have been counted.

Something else to consider is the sample size of this poll. Even though the poll (conducted from 23-24 Oct) sampled 500 people, only 365 expressed a Yes or No preference. This is a pretty small sample. Using only those 365 individuals, 200 who said, “No” and 165 who said “Yes”, I ran a Monte Carlo simulation to estimate the probability that I-517 would win right now. From a million simulated elections, “Yes” won 94,839 and “No” won 898,738 times.

The analysis suggests that the initiative has only a 9.5% probability of winning. Here is the distribution of votes from the simulation: 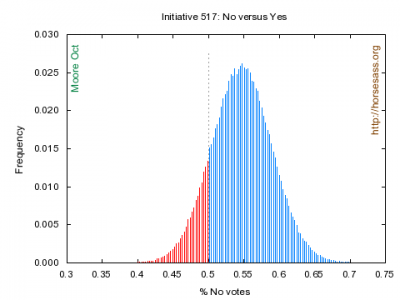 Considering these “non-significant” statistical results (which are only based on the poll numbers) and Joel’s caution, I-517 opponents still have plenty of work to do; proponents still have a shot at changing the outcome.

The momentum is on the side of the opponents, however. The subsample of those polled who had already voted “Yes” or “No” on the initiative (104 people), I-517 was losing 37% “Yes” to 63% “No”. (Note that I’ve eliminated the “Don’t Know/Refused” category in those numbers.)

The trend in polling also suggests that I-517 is going down. An Elway poll, taken way back in early September, found 58% supporting and 22% opposed to the initiative. Another Elway poll from mid-October cut into the support with 52% supporting and 25% opposing the measure.

So, the most recent poll suggests a pretty impressive turn-around in support.