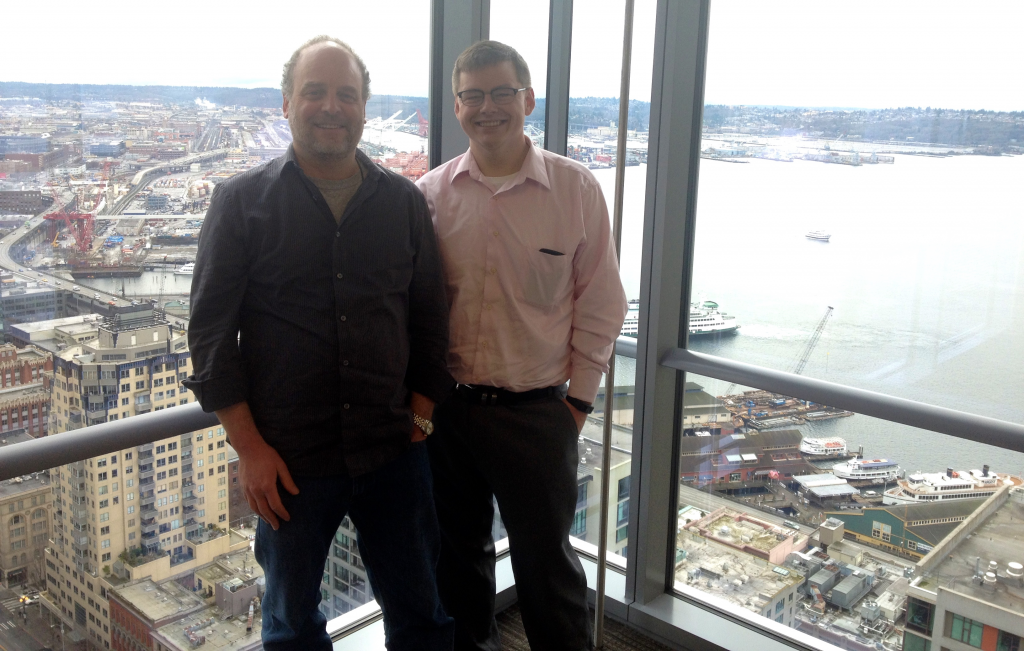 Paul and I enjoy the actual view from our actual corner office.

So welcome, Paul Constant, to Nicktopia—the land of milk and honey! (No, really: Both milk and honey are available in our office’s well-stocked kitchen, along with a variety of free snacks and beverages.)

If there’s anybody who knows what Paul is going through right now, it’s me, but I can honestly tell him that it gets better. The worst thing about leaving The Stranger is leaving our brilliant and talented co-workers behind. (And our awful/wonderful readers—God I miss Slog.) But as Paul will soon learn, the best thing about leaving The Stranger is just about everything else: more pay, more freedom, more influence, better working conditions, and potentially, a much larger audience.

At first, Paul will be doing pretty much what I was hired to do: read, think, talk, and write about public policy. Mostly income inequality, some guns. Our ambitious charge is nothing less than rewriting our nation’s economic narrative into one that recognizes the primacy of people over money. But over time, we intend to build out a little platform of our own where we can think out loud about a range of issues. So if, say, you lament the loss of Paul’s 2016 election coverage on Slog, don’t despair. You’re not alone. Nick didn’t hire Paul and me to silence us.

And finally, if the timing looks suspicious, I want to be clear that Paul did not leave The Stranger to come to work for Nick. We had no prior discussions. That Paul landed on his feet (and 28 floors up!) so quickly after his abrupt departure from The Stranger is a testament to Paul’s talent and work ethic.

So, yeah. Welcome, Paul. And don’t make me look bad by writing too much too quickly.