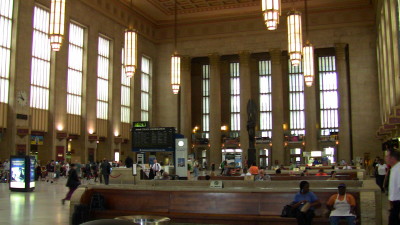 It’s no Grand Central, but Philadelphia’s refurbished 30th Street Station, is pretty damn grand in itself, a relic from the heyday of rail travel in America, and a damn sight less seedy and more inviting than it was in the days of my youth. It also seemed to be more crowded too, with a bustling lunchtime rush filling the new food court. (Well, new to me.)

The station is also more conveniently located than I remembered, as I discovered when I walked across the river to score myself a Philadelphia style soft pretzel from one of the many street cart vendors, only to find myself standing outside a Trader Joes. After stocking up on a few snacks and beverages for the long ride to Pittsburgh, I walked back to the station and had myself a cup of Dunkin Donuts coffee.

At this point I’m more than halfway through the seven and half hour ride, having just traversed the famous horseshoe curve, and one of the biggest surprises of the trip is how well my Internet access has held up via the AT&T 3G network on my iPhone… and hence my ability to surf and post. Sure, there have been plenty of areas of no service, especially here in what us East Coasters call “mountains,” but anybody expecting to get work done with a similar hookup won’t be too disappointed. And unlike the train cars on the Amtrak Cascades line, there are power outlets at every seat.

As for the rest of the trip, it’s been pretty much what I expected: smooth, quiet ride, plenty of leg room, and the ability to take a walk down the aisle whenever the mood strikes me. Another surprise, though I guess it shouldn’t have been, is the number of freight trains we’ve passed on this trip, many of them laden with coal. Amtrak’s Pennsylvanian may make only a single round trip between Pittsburgh and Philadelphia a day, but for those of us looking forward to a passenger rail revival, it should be encouraging to realize that freight rail never died.

And oh yeah… so far, the train is exactly on time.