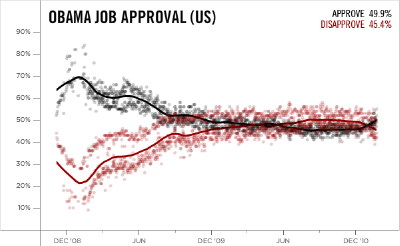 Anyone notice that Cynical hasn’t been hanging around in the comment threads lately, relentlessly flogging Rasmussen’s presidential approval poll numbers? Hmm… I wonder why?

Of course, most of the fluctuation in Obama’s approval rating has come at the hands of independents, which is in itself a sad commentary on the state of American politics. These independents are the ones politicians have to appeal to in order to win elections… you know, the exact same voters who can’t seem to make up their fucking minds. That explains a lot.