I will donate money to Rand Paul’s campaign if he promises to kidnap GOP Senators and force them to take bong hits. 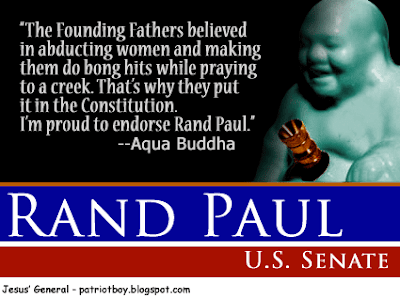 UPDATE 2: In more important news today, Google and Verizon have proposed a framework that attempts to eliminate the principle of net neutrality for wireless broadband networks. The key issue is over whether the internet will function the same on your portable device as it does on your home network. This agreement would open the door to having the the internet on your cell phone function more like cable TV – with content limited to those who can pay to have their content carried, rather than like the rest of the internet where everyone’s webpage is treated equally. Joan McCarter and Andrew Villeneuve write more.