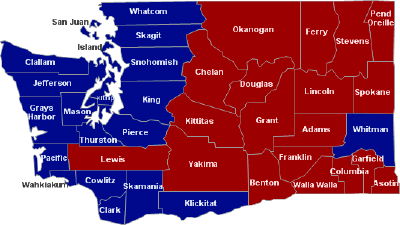 Even the most casual observer of Washington state politics is acutely aware of the Cascade Curtain, the physical and cultural barrier that separates East from West, right from left, and Republicans from Democrats. This pathological East/West divide is the cause of much of the dysfunction that plagues our state political system, yet if you ask an elected official how we might bridge this gap, don’t expect to elicit much more than tired platitudes or a roll of the eyes.

But I wonder if one of the ways to bring the two sides of the state closer together both politically and culturally is to close the physical distance between them… namely, by building high-speed rail from Seattle to Spokane.

That’s exactly what’s happening in Spain, where an ambitious new high-speed rail network is binding historically separate and distinctive regions together into a much more cohesive nation:

Spain opened its first Alta Velocidad Española, or AVE, high-speed train route in 1992, between Madrid and Seville. The network has grown to nearly 2,000 kilometers and stretches from Malaga on the south coast to Barcelona, which is north and east.

Supporters say the AVE has begun to transform the country, binding remote and sometimes restive regions to Madrid and leading traditionally homebound Spaniards to move around for work or leisure.

“Spaniards have rediscovered the train,” said Iñaki Barrón de Angoiti, director of high-speed rail at the International Union of Railways in Paris. “The AVE has changed the way people live, the way they do business. Spaniards don’t move around a lot, but the AVE is even changing that.”

By slashing the time it takes to travel from one city to another, high-speed rail in Spain and elsewhere has increased tourism, altered housing patterns, and lured millions of travelers out of airplanes and cars. According to the International Union of Railways, a high-speed train can carry eight times as many passengers as an airplane over an equal distance, using the the same amount of energy, while emitting a quarter of the CO2 per person. It also creates economic opportunities outside the traditional urban cores that never before existed.

For example, previous studies have suggested that high-speed rail could connect downtown Seattle to Moses Lake in under an hour, with Spokane only another half hour away. That’s downtown Seattle to downtown Spokane in less time than one typically spends at the airport before departure. Such a rail line could instantly transform Moses Lake into a viable international airport, while creating the freedom to live and work anywhere near a station.

Live in Spokane and work in Seattle, or vice versa? That’s a shorter commute, time-wise, than between some parts of Long Island and Manhatten. And just think of the economic opportunity this would create in the half dozen or so counties through which a high-speed line would pass.

When we tie the people and economies of Washington state closer together, when prosperity in King County directly generates prosperity in Kittitas and Grant counties too, that’s when the politics of this state will become less divisive. And as has been proven in other parts of the world, high-speed rail can put us on the fast track toward achieving that goal.