For months now Tim Eyman has been touting the “statistic” that property taxes in WA state have increased from $1 billion in 1980 to $6.25 billion in 2003, a figure he calls “obscene.” He even used a chart based on this stat as the backdrop for his lonely press conference on Monday.

What is really obscene is that this misleading piece of propaganda is repeated in the media without any context or analysis. So I want to give you a preview of some research I plan to post later this week to TaxSanity.org, that examines Tim’s chart and dispassionately explains why it is a meaningless piece of crap.

Take a look at this alternative chart from the state Dept. of Revenue: 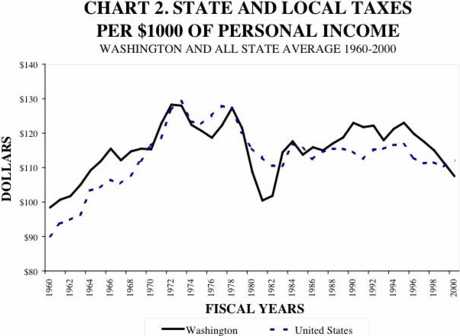 Apart from the fact that state and local taxes as a percentage of personal income have actually been declining steadily for years, one thing really jumps out from this chart… that Tim’s start date of 1980 is intentional misleading, as it represents an anomalous twenty-year low in tax rates. Indeed, if you start one year earlier, in 1979, tax burden has clearly and dramatically decreased.

Tim’s figures are taken out of both historical and economic context to present the false impression that government growth is exploding out of control. It fails to consider, population growth, inflation, loss of federal funds, and shifts of revenues from one tax source to another. And oh what a difference a year makes.

According to the Washington State Tax Structure Committee (chaired by Bill Gates Sr.) and every other reputable source, the economic figure that most close tracks growth in demand for public services is growth in personal income. Personal income is also the only number which permits a true measure of tax burden, for obvious reasons.

It is not surprising that the entire premise of Tim’s tax revolt is built on lies, but it is disappointing that nobody has bothered to expose it sooner.