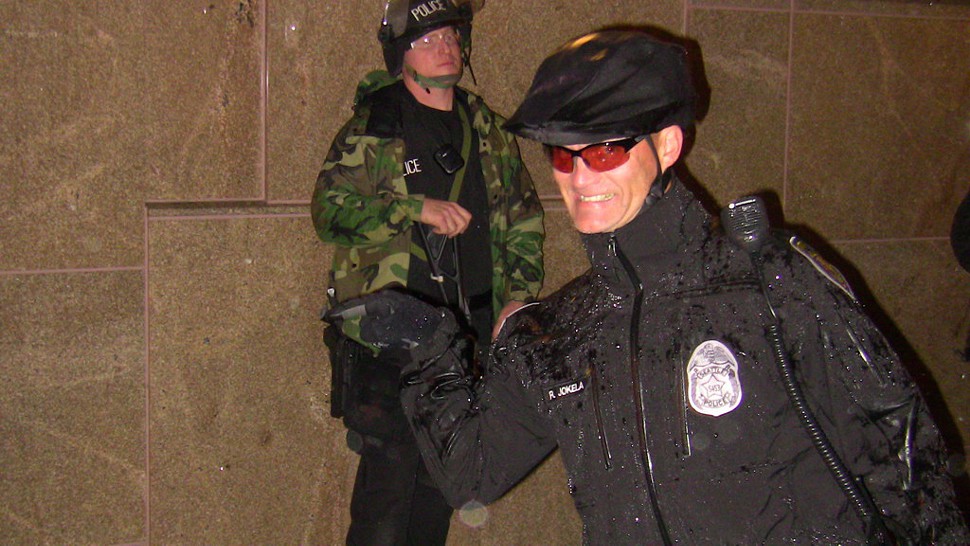 As was reported in The Stranger earlier today, 63 of the 83 marijuana tickets written up this year—a $55 fine for smoking pot in public—have been issued by a single Seattle police officer. And now the Seattle Times has identified that officer as none other than Randy Jokela, one of the few officers who treated me unprofessionally during all my coverage of the Occupy Seattle demonstrations. Here’s what I wrote on Slog back in November of 2011:

To be clear, most of my interactions with Seattle police officers during the Occupy Seattle protests have been friendly, respectful, and professional, but last night… not so much.

When I asked an officer what his scary looking riot gun shot, he repeatedly responded “flowers.” Ha, ha. And every time I struggled to get a close up shot of a gun (rain on the lens was fucking with my autofocus), another clown-cop, the appropriately named Officer Jokela kept jumping in the way, striking what he thought were comical poses.

… So far, Seattle has escaped the worst kind of police abuses we’ve seen in NYC, Oakland and elsewhere … but there are certainly some bad apples on the force who are just itching to lash out, and who seem to disturbingly enjoy their opportunities to do just that; it’s something their commanding officers and more responsible colleagues might want to keep an eye on…

Elsewhere in the comment threads on Slog, eyewitnesses also identified Jokela as the officer who gratuitously mocked a Coast Guard veteran after he’d been pepper-sprayed. Officer Jokela is clearly a bad apple with a history of treating the public disrespectfully. And it’s hard to imagine his commanding officers weren’t aware.