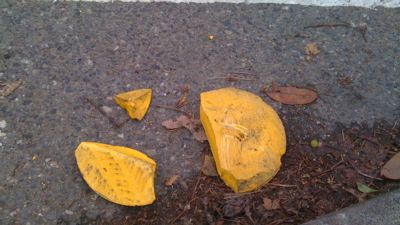 No doubt the snow storms and sub-freezing temperatures that iced over our roads for much of last week were frustrating to a region unaccustomed to and unprepared for ice and snow, but in the end, it was only a week, and it was only the first time since 1990 that such wintry conditions survived for more the a few days, before being melted away by our typically warmer and rainier weather. So while I was as inconvenienced as anybody—not even the Postal Service was willing to brave it up and down my hill for seven days—I’m not particularly angry or concerned about the way the city responded to the mess.

Shit happens, and as Mayor Nickels acknowledged today, the city is ready to reevaluate its snow clearing procedures and work with Metro to provide more reliable service during future storms.  But if it’s another 18 years before shit like this hits the region again, I’ll be neither surprised nor disappointed if the city’s performance isn’t any better.

But those of you demanding truckloads of salt and an army of steel-tipped snowplows to scrape the streets clean the next time a couple of inches of white stuff blankets the region better be prepared to deal with the consequences, because even the city’s minimal response has created or exacerbated damage that will take months, and hundreds of thousands of dollars to repair.

Case in point, the hundreds of reflective “turtles” lying dead and dismembered on the sides of our roads, their shells cracked and broken in the wake of even rubber-tipped plows.  As a transplant, I’ve learned to love these turtle markers, visible even on rainy nights, and ready to provide a rumbling warning when you  stray over the line.  We had plenty of salt and snowplows back in Philadelphia, but few turtles, as few would survive a typical winter of frequent plowing.  Given the rarity of extended snow events here in Seattle, I’d choose the turtles over the plows, and while I don’t have any numbers to support my assertion, I’m guessing so would traffic safety statisticians.

You don’t get something for nothing, and there are costs to salt and plows beyond the cost of the actual salt and the plows.  Of course we could do a better job clearing the roads, but I’m just not sure it’s worth the tradeoffs.