There are three new state head-to-head polls in the Obama—Romney match up since my previous analysis. All three states are important.

The Florida poll offers Obama a +8% edge over Romney. In Missouri, Obama and Romney are tied at 45%, and in Ohio Obama leads Romney by +7%.

All three polls reflect improvements over the previous poll in each state for Obama. It’s hard to tell if the improvements are a bump from Obama’s State of the Union address, a genuine lasting shift in public opinion, or whether voters are simply tiring of the Republican brawl.

Obama would have a 99.4% probability of winning an election held now, an improvement over his 95.1% probability in the previous analysis. 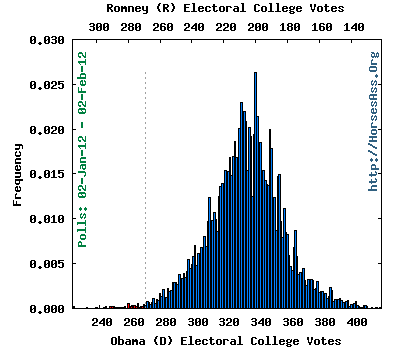