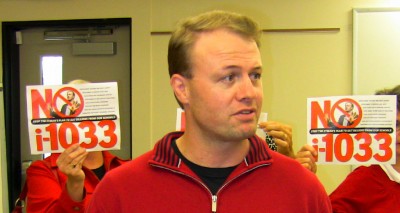 A teacher from Colorado joined local teachers at press conference this morning to explain how Initiative 1033 would harm education in Washington state, and guess who showed up to crash the party?

I’m editing video now of some of the highlights of the press conference, plus some very rude treatment of me and Joel Connelly when we attempted to ask Tim Eyman serious questions. I mean, really… what a horse’s ass.