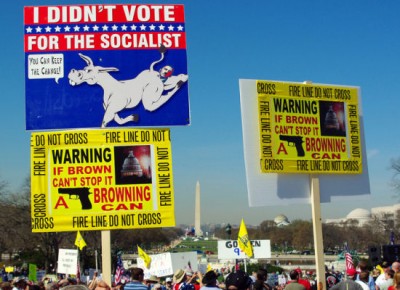 They’ve never been anything more than an angry mob:

Tea partiers and other anti-health care activists are known to get rowdy, but today’s protest on Capitol Hill–the day before the House is set to vote on historic health care legislation–went beyond the usual chanting and controversial signs, and veered into ugly bigotry and intimidation.

[…] And that wasn’t an isolated incident. Early this afternoon, standing outside a Democratic whip meeting in the Longworth House office building, I watched Rep. Barney Frank (D-MA) make his way out the door, en route to the neighboring Rayburn building. As he rounded the corner toward the exit, wading through a huge crowd of tea partiers and other health care protesters, an elderly white man screamed “Barney, you faggot”–a line that caused dozens of his confederates to erupt in laughter.

After that incident, Capitol police threatened to expel the protesters from the building, but were outnumbered and quickly overwhelmed.

Makes you proud to be an American, huh?

Of course, bullies are also cowards, and outside of the security of their own mob, I don’t really believe that most tea baggers have the balls to act on their convictions, let alone their threats (The traitor Dave Reichert votes for cap and trade, yet faces no Tea Party challenger… what’s up with that?), but as I’ve written before, there are crazies out there, and violent rhetoric breeds violent actions. So if health care reform does pass, and right-wing violence does break out, I hope responsible political leaders have the guts to brand them as the terrorists they really are.