The name Shannon Harps rang a vague bell from sustainability circles, so I did a search and there she was in my inbox and address book, in various email threads relating to a Sierra Club project called Kilowatt Ours. Over the next few days other sixth-degree connections will return from ski vacations and holiday excursions, only to open email from the dead. This may be one reason why the community is in such shock. Email and blogs and Flickrs and YouTubes equate to digital immortality far more enduring than anything an obituary can provide. More on Harps, including a sketch of the suspect, in today’s P-I coverage. Yet to be addressed: Is the relative effectiveness of emergency care an issue on New Year’s Eve? Might be a story there.

The Harps tragedy merely builds on 2008’s uplifting theme of death and dying. Over at The Times there is wonderment at whether a mentally ill son who killed his mother has the right to her estate. And the archives continue to swell at both papers with stuff from the Carnation Christmas eve killings, the Christmas Day state trooper shooting and other acts of homicidal holiday cheer.

Also, Seattle police have added surveillance cameras at 18 intersections, which gladdens my bicycling heart (anything to induce paranoia in the few crazy-ass drivers who threaten to give law-abiding drivers like yourselves a bad name) even as I admit these things are not so much for traffic monitoring as just another get-used-to-it data mining of our everyday lives for a plethora of doubtless innovative end uses. Someday we’ll have real-time video of an entire Capitol Hill stabbing and no one will be asking if that’s a good or bad thing.

Apart from that, what’s interesting about The Times opening screen is that a third of it is taken up by real-estate ads. When you’re facing a $6 million deficit, every little bit helps. After all, who knows how many property-ad dollars there’ll be six months from now, as Seattle hits the wall that has squished everyone else (no real-estate ads on the home page of the San Francisco Chron, for comparison). For the time being, we who have no shame humbly point out that HA remains a relative bargain for all you marketers looking to sell to smart investors like the Rabbit.

Perhaps on any other day, oil passing $100 would be Page 1 news. But an anxious nation has the Iowa caucuses to divert its attention. The Times, in one of those “amazing” measures that helped save it $21 million, does not appear to be sending anyone to cover Iowa, something even The Stranger found the wherewithal to do. As for me, pecking away in the quiet comfort of my north Seattle home office, man am I glad someone else has to do tomorrow’s headlines. 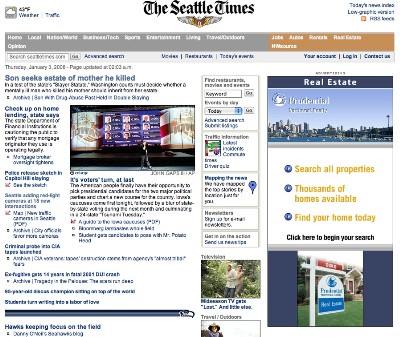