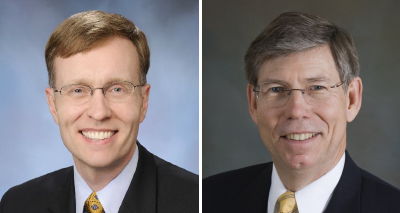 It wasn’t so long ago that Florida Attorney General Bill McCollum was the overwhelming favorite to win this year’s gubernatorial election, but now it looks like he might not even get out of the Republican primary:

It is a stunning shift for a seasoned politician who seemed to have a lock on the race just two months ago…Supporters fault McCollum’s TV message, his inability to connect with an angry electorate, fundraising shortcomings and a dated campaign style, emphasizing endorsements from establishment figures such as Jeb Bush and Mitt Romney at a time when voters feel alienated.

Sounds a bit like Washington AG Rob McKenna, who appears to have a lot in common with his Florida counterpart. Both are stiff, spectacled, Republican establishment type attorney generals with gubernatorial ambitions, and both have prominently placed themselves in opposition to health care reform, McCollum taking the lead on the lawsuit challenging it, and McKenna quickly signing on. McKenna and McCollum both kinda look alike, too.

So perhaps there’s a lesson for McKenna to learn from McCollum, who didn’t get much right-wing traction from his blatant teabagger pandering on health care reform. Perhaps if you empower the teabaggers by legitimizing them, they can come back and bite you in the ass? You know, especially if they learn you’ve risked a constitutional crisis in defense of broadening the powers of eminent domain?

McKenna is gonna have to make a decision about the Tea Party: he’s either with them or against them. And unless he’s with them 100 percent of the time, he sure can’t count on them being with him come election time.