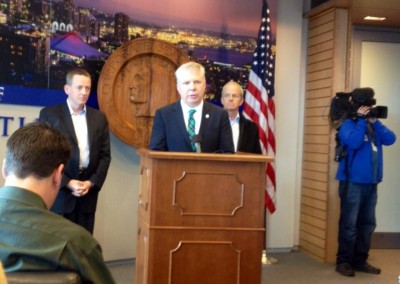 Seattle Mayor Ed Murray packed a conference room at city hall this afternoon to announce that he has no minimum wage proposal. At least not yet. Oh well.

Murray did outline several main points. If he had made a proposal it would phase in to $15 (eventually), indexed to inflation (eventually), with a slower phase-in for small businesses, however “small” is ultimately defined. There would be no “exemptions” we’re told, but there would be a phased out deduction for the cost of providing some benefits. And maybe a tip credit. That’s still under discussion.

I don’t mean to come off as snarky here. This isn’t easy. But he’s pretty much talking about all the things we’ve all been talking about, but without providing much specificity.