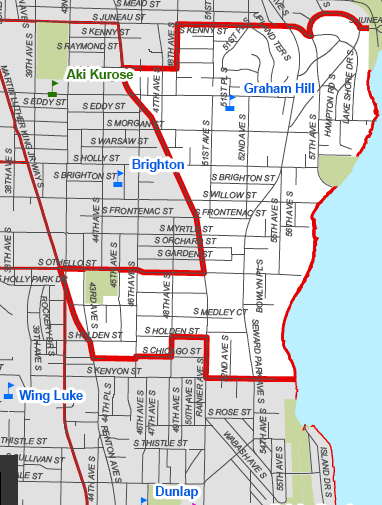 One more quick comment about the Seattle School District’s new assignment plan, to note that with the majority of students already attending neighborhood schools, much of the impact of the plan will depend on how thoughtfully the district redraws the new reference maps. For example, take my daughter’s old school, Graham Hill Elementary. Living on the same block as the school, we couldn’t get much closer, so no amount of gerrymandering would have impacted us. But the same wouldn’t be true for some of her friends who lived only a few blocks away.

The problem with the current map for the Graham Hill community is that the school lies near the northern end of a stretched out reference area that extends southward along Lake Washington before jutting west past Rainier AVE, just south of Othello ST. Indeed, back during the 2006 closure process, one of the arguments the district used to justify closing the school was that so few of its students lived within its boundaries; not surprising considering that the bulk of its potential families actually live closer to one of three other other schools — Brighton, Wing Luke and Dunlop — and in many cases, closer to all three schools than to Graham Hill.

On the other hand, when looking at the percentage of students who actually lived within a one-mile radius, Graham Hill had one of the highest walkability scores in the district, drawing many of its students from the Whitworth reference area just to the north. Down in our area of the city, most families already are choosing their neighborhood elementary school… they’re just not doing so along the artificial boundary lines the district has drawn.

So if the district were to adopt a neighborhood assignment plan while leaving the current boundaries unchanged, it could fracture the communities at four neighborhood schools, while ironically increasing transportation costs. Surely an unintended consequence, but a very possible one nonetheless.

My concern, coming off my unhappy experience with the school closure process, is whether the district is pursuing this strategy for the sake of efficiency, with too little empathy for how disruptive this policy change could be for the current generation of students, and without nearly enough input from the neighborhood schools themselves.

I guess we’ll soon find out.