The Republic of the Marshall Islands is a nation consisting of twenty-nine atolls and five isolated islands, about 69-square miles of land scattered over 3/4 million square miles of the western Pacific. Settled by Micronesians about three thousand years ago, the inhabitants have managed to survive German, Japanese and U.S. protectorates, the latter during which their “protectors” detonated 67 nuclear weapons, contaminating a number of atolls with nuclear fallout.

Having survived all that, sometime over the next century or so, the Marshall Islands may disappear completely, swamped by rising sea levels.

Marshall Islands President Kessai Note was in Seattle this week to sign a Statement of Shared Action with King County Executive Ron Sims, the first such agreement signed between his nation and a U.S. municipal government. The agreement calls for sharing scientific and technical expertise, coordinating activities to advise international and U.S. policy makers, and developing a “shared international network of action to help slow, stop and reverse the growth of greenhouse gas pollution.” It also recognizes shared interest in mitigating the impact of global warming.

But the impact on King County is nothing compared to projected impact on the Marshallese. 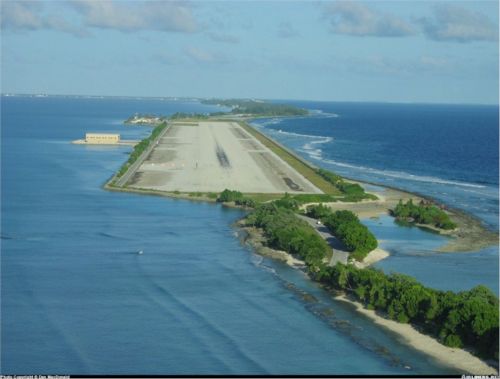 The Marshall Islands stand an average 7-feet above sea level, with the highest point on the highest island rising to only 20-feet. In describing the Marshallese relationship to the land President Note stated that “even the loss of a few acres is devastating to every aspect of life.” Even if sea levels rise only a few feet, entire atolls will disappear or become uninhabitable. The 20-foot sea level rise predicted by a partial melting of the Greenland and Antarctic ice sheets would completely inundate the nation.

The Marshallese will be amongst the world’s first global warming refugees.

What does any of this have to do with King County?

At the press conference on Friday President Note emphasized that the story of climate change in the Marshall Islands is a story of how both local actions and local inaction has global consequences, while Sims strayed from his prepared text to talk for a moment about the Alaska Way Viaduct. Absent from our tunnel vs rebuild debate, Sims said, has been a discussion of the impact on carbon emissions, the primary cause of global warming. Both of our political establishment’s preferred alternatives are ones that increase traffic capacity. But if we were really interested in reducing carbon emissions — if we were really interested in acting globally — then we should at least be studying how we might meet our region’s transportation needs while reducing capacity and pushing more trips into public transit.

But we don’t have these debates in the U.S., not even in liberal, “metro-natural” Seattle.

Meanwhile, as we find it too difficult to even imagine getting out of our cars once and while, an entire island nation with a three-thousand-year-old culture is about to slip beneath the seas, largely due to our own environmental pollution.