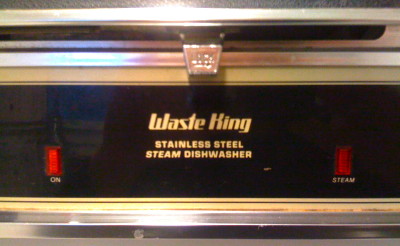 The King is dead. The Waste King, that is… the forty-some-year-old portable dishwasher that came with our house back in 1997, and that had been dying a slow death by entropy ever since.

First the spring on the door went, then the latch on the detergent compartment. A couple years ago, the King started make a loud grinding noise during wash cycles, and more recently had sprung a slow muddy leak. But up until a couple weeks ago, when it abruptly died mid-cycle, the King continued to get my dishes clean.

Since then, I’ve been washing all my dishes by hand, resulting in a bit of an epiphany. For example, I used to think I didn’t have enough mugs, as I tended to dirty all of my favorite ones (heavy, with a slight lip) before I was ready to run a full load. But now I realize I have too many mugs; in fact, for my personal use, all I usually need is one.

Likewise, my kitchen is stocked with two complete sets of flatware, yet I’d often run out of teaspoons between loads. But now that I have to wash every damn spoon by hand, well, let’s just say that I’ve learned to be a bit more frugal.

And that’s the curious thing about labor saving devices like dishwashers—their purpose is to clean the dishes we have, and yet they inevitably lead to us dirtying even more dishes. Similarly, imagine if you had to wash all your own clothes by hand; dontcha think you might wear your clothes more times between washings? And with fewer washings, your clothes would last longer, meaning ultimately, you’d buy fewer clothes.

In fact, there’s hardly an appliance, machine or device I can think of which doesn’t inherently demand increased consumption, just by the very nature of owning it.

All that said, if you know of anybody with a portable dishwasher for sale, in decent working condition, I’m in the market for buying one. Le Roi est mort, vive le Roi.