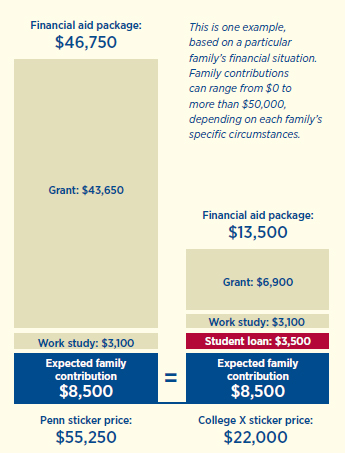 As I explained yesterday on Slog, the High Tuition/High Financial Aid model proposed by Gov. Gregoire’s higher education task force, doesn’t exactly work if the plan doesn’t guarantee high financial aid, and from what I’ve seen of it, I’m just not confident that this proposal does. What might satisfy me? Well, for one, a philosophical shift in the task force’s objectives:

Along with more money from tuition, the task force’s proposal would lessen the impact to lower- and middle-income families by creating a private financial-aid endowment, with a goal of raising $1 billion in the next decade.

Change “lessen the impact” to “eliminate the impact,” and then back it up with reasonable safeguards, and you might just get my support, along with a enough Democrats in Olympia to make this a reality. Otherwise… piss off.

As the chart at the top of the post illustrates, it is possible to charge sky-high tuition, while keeping a college degree affordable to lower- and middle-income families. This chart compares the net costs at my admittedly pricey alma mater, the University of Pennsylvania, to those at a typical public university, and as you can see, once financial aid packages are factored in, Penn can turn out to be just as affordable. In fact, more so, as Penn’s aid comes entirely in the form of grants, meaning its students no longer graduate with tens of thousands of dollars in loans.

That’s the way the High Tuition/High Financial Aid model is supposed to work. Those families that can afford to pay full price do; those who can’t, pay what they can afford. At Penn, students from typical families earning less than $90,000 a year receive grants equal to full tuition and fees; students from families earning less than $40,000 have their room and board covered too.

And it could work that way in Washington state too, if both the money and the commitment is there to move to this model without making a four-year degree less affordable to lower- and middle-income families.

So in the interest of moving this conversation forward, I’d like to suggest that my friends in the legislature consider this very simple but significant amendment to the task force’s proposals: give our four-year universities the freedom to set tuition prices as they see fit, but impose a needs tested cap on the net cost to in-state, lower- and middle-income families.

In the end, I couldn’t care less where the sticker price of a UW degree falls in relation to that at comparable public universities, and neither should should students or lawmakers. All that matters is the net cost of that degree in relation to what the student can afford. And if we as a state can embrace and defend this principle, then the move to tuition flexibility can be a net plus for our higher education system as a whole.