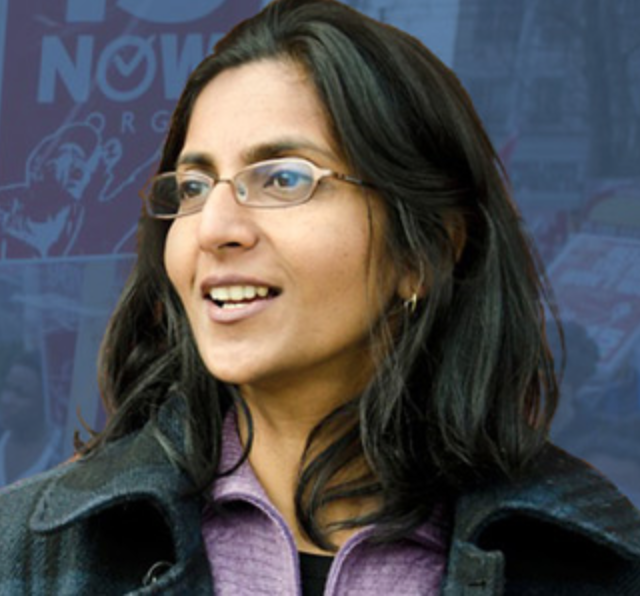 Last week Seattle City Council member Kshama Sawant* and I got into a conversation about rent control via email, and she provided such a clear and straightforward explanation of her position, that I asked if I could just repost it here to HA. Instead, she got back to me with the following slightly expanded, better formatted, and presumably copy edited version of her initial off-the-cuff response.

Critics have attempted to dismiss Sawant’s affordable housing advocacy as narrow, divisive, and unrealistic—at best a distraction from the real work at hand. But as you will read from the thoughtful response below, that is a gross mischaracterization. Sawant calls for a “comprehensive” approach. She supports using bonding capacity to build publicly owned housing. She supports most of the HALA recommendations, but would go further by including a “robust linkage fee.” Still, I specifically asked about rent control, and that is the focus of her response.

To me, the most compelling policy and political argument Sawant makes is the way she compares rent control to the minimum wage: they are both minimum standards necessary to protect against the natural imbalance of of power between landlord and tenant, or employer and employee. Rent control is not about repealing the market; it’s about reining in its excesses. And according to Sawant, the alleged construction-destroying impacts of rent control are just as unsubstantiated as the alleged job-killing impacts of the minimum wage.

Makes sense. But you can read for yourself:

Which Way for Affordable Housing in Seattle?

Seattle is booming with job growth and a major influx of working people. Yes, we need increased housing supply. Yes, we need zoning changes to build more housing, and to enable a denser and more walkable and accessible city. But why is there such a severe shortage of affordable housing in Seattle? And what is the solution to the problem?

Is It Just about Supply and Demand?
We are told that we need only rely on the so-called “free market.” We are told it is simply about supply and demand. Let developers build, let the supply of market-rate units increase. And at some point, magically, prices will come down and create housing affordability.

Not one of the proponents of this trickle-down theory can give a plausible idea, or even so much as a rough estimate, of how many units would have to be built for that point of affordability to be reached. We are asked to go on faith.

Amanda Burden, the director of New York City’s Department of Planning, a couple of years ago acknowledged that she had truly believed that NYC could build its way out of an affordable housing shortage. She said the city “built tremendous amount of housing” with that hope, “and the price of housing didn’t go down at all.”

Why Are We Losing Existing Affordable Units?
Supply and demand do explain why Seattle rents are going up. How much your rent increases, however, is determined by the relative balance of forces between tenants and the real estate lobby. Much the same way that wages and benefits in the workplace are a reflection of how much power workers have, including whether or not they have a union, to allow them to negotiate better working conditions.

In the absence of substantial tenant protections, rents tend to not only increase in a high-demand market, but to skyrocket. Why? Because developers and landlords can get away with it.

This opportunity to jack up rents means that tenants residing in market-available affordable units experience massive rent increases, which implies economic eviction. After the tenants are driven out, the previously affordable units are renovated, sometimes even minimally, and then rented for twice or three times the original rents.

What Policies Would Make Housing Affordable?
To actually create new affordable housing, we need a comprehensive policy program. I support most of the recommendations of the HALA committee, although they don’t go far enough. We need a robust linkage fee on big developers to generate a billion dollars to build affordable housing. We must also leverage the City’s bonding capacity to build thousands of units of City-owned affordable housing.

But it will take years to build the thousands of affordable housing units that Seattle desperately needs. In the meanwhile, policies that stabilize rent increases are essential in order to prevent price gouging. The citywide wave of economic evictions and displacement will not be stemmed without rent regulation.

By rent control, we mean linking rent increases to inflation. Landlords could still make profits and finance maintenance, but the massive rent hikes and economic evictions that we are seeing in Seattle would be prohibited.

Contrary to the myth that rent control slows construction and hurts housing supply, the two largest building booms in New York City history occurred in periods of strict rent control, first in the 1920s and again from 1947-1965. Demonizing rent control is inconsistent with what the numbers tell us.

But Republicans Control Olympia, So We can’t Win Rent Control Anyway, So Why Even Discuss It?
Rent controls are most needed in areas with runaway prices, which is typically localized metropolitan regions such as cities or counties. So the real estate lobby has always fought rent control by pouring money into the campaigns of conservative state-level politicians running from rural districts, where constituents are not demanding rent stabilization. Nothing unique about Washington State there.

And the only way metropolitan areas have won rent control despite all the real estate lobby money is by building a mass movement in their cities and counties and pushing back against the state. This is exactly what I have proposed as a political strategy here in Seattle. As a first step, Councilmember Licata and I have introduced a resolution to demand that Olympia repeal the ban on all rent regulations. I urge you to sign the petition in support of this resolution.

Rent Control is One of Many Tenant Protections Seattle Needs
We need rent control, but in the meantime we also need to urgently enact other laws to protect tenants. Developer loopholes need to be closed so relocation assistance can be expanded to tenants experiencing economic evictions. Tenants need more than 60-day notice in case of large rent increases (greater than 10 or 20%). Tenants with expiring leases need just-cause eviction protections.

Additionally, late fees and move-in costs for renters need to be capped. Penalties for deposit theft need to be increased. And we need a law that will require interest accrued on deposits to be returned to tenants.

To make all this possible, the City must fully fund the enforcement of tenant rights in the same way that we are setting out to enforce labor laws with the new Office of Labor Standards.

I would view the full spectrum of tenant protections (including regulating rents) with a lens similar to workplace rights. Laws such as minimum wage, paid sick leave, anti-discrimination, occupational safety, and the right to unionize haven’t killed jobs or prevented companies from making profits.

These laws protect workers and provide for a better quality of life for working people. Even the proponents of the free market theory are themselves beneficiaries of the gains of labor struggles. The gains from successful housing affordability policies will be no different. The victory on the $15 minimum wage shows what workers can win when they organize and fight back. We need to build a similarly powerful organized movement for housing justice. Let us begin.

* Duh-uh, I’m a Kshama Sawant supporter. Only an idiot would need this disclaimer, but, well, you know….