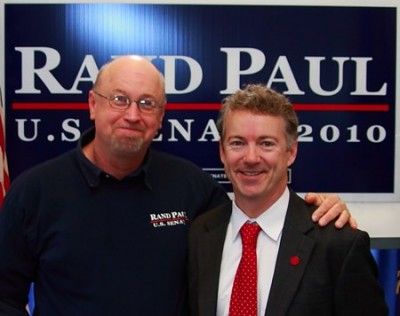 If you thought the brutal head stomping of a MoveOn activist outside last night’s U.S. Senate debate in Lexington KY was some sort of random act of mob violence, well, think again. It turns out that the assailant was Tim Profitt, Paul’s now-former Bourbon County Coordinator. And, according to the victim, it appears to have been premeditated as well.

“The Rand Paul campaign knows me and they have expressed their distaste for my work before,” Lauren Valle, 23, told TPM and two other reporters on a conference call this afternoon.

According to Valle, several men surrounded her before Paul arrived at the event in Lexington last night.

“They surrounded me,” she said. “There were about five of them, they started motioning to each other, and they got behind me.”

Valle says her partner, whom she identified as Alex, overheard the men threaten, “we’re here to do crowd control and we might have to take someone out…”

“Rand Paul’s car arrived, and as soon as it did, a couple of them stepped right in front of me and so I stepped off the curb to get around them, back out to the front, and at that point they started grabbing for me and I ran all the way around the car with them in pursuit, and the point at which they see the footage is after I’ve run all the way around the car and am in front of the car and that is when they take me down,” Valle said.

I’m not sure what’s more disturbing, the thought that this might have been an unprovoked, premeditated act of physical violence, or the thought that assailants actually believed that a 23-year-old, female MoveOn activist presented enough of a clear and present physical threat to Paul, that they chased her around car, tackled her to the ground, and stomped on her head in self-defense?

Because if they really believe that our mere presence is so dangerous, absolutely anything could happen next.