So according to Glenn Greenwald the lovely Fox Noise channel is going to “war game” a possible civil war this week. Nice.

They discuss a coming “civil war” led by American “Bubba” militias — Beck says he “believes we’re on this road” — and they contemplate whether the U.S. military would follow the President’s orders to subdue civil unrest or would instead join with “the people” in defense of their Constitutional rights against the Government (they agree that the U.S. military would be with “the people”):

I really don’t have much comment other than to offer an image. It’s one painted onto the wall of the state capital in Topeka, Kansas. This is my cultural heritage, if the “Bubbas” want to start in with waving the bloody shirt after 144 years. 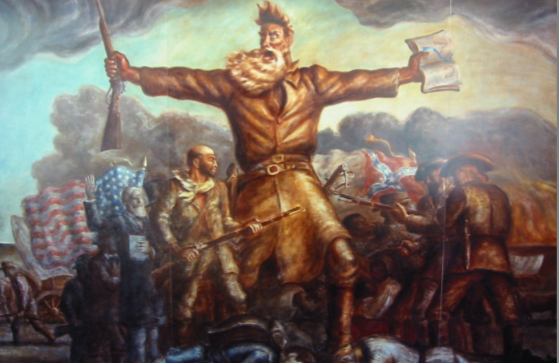 Oh, and BTW, the Union won. Funny how the “Bubbas” always seem to forget that part. The South was destroyed by military force, occupied, and then ultimately (after another 100 years) forced to submit to the rules of civilization.

They can bitch and moan about it all they want on AM radio, but they still lost. You don’t see me putting pictures of John Brown on my pickup truck and calling for neo-Reconstruction, now, do you? Although I will still argue that Florida should have lost some Congress-critters after the 2000 election debacle….