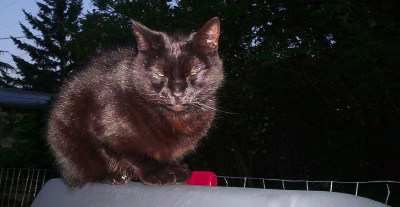 About two years ago, coyotes started to become a frequent sighting in Seward Park, and cats started disappearing from the surrounding neighborhood. I saw the “lost cat” posters popping up on nearby telephone poles, and heard the grisly stories of mangled cat parts found scattered through nearby yards, but living almost a mile from the park and just couple blocks up the hill from busy Rainier Avenue, I didn’t pay it that much attention… until our cat nearly fell victim to an apparent coyote attack.

Shortly thereafter a coyote casually crossed our path less than fifty feet ahead of us on a trail in Seward Park, in the middle of the day. And only about six months ago, I drove up to my house around dusk, just in time to see a coyote stroll out of my yard and down the sidewalk. (Fortunately, our cat was safely indoors at the time.) Meanwhile, lost kitty posters continue to be a mainstay on neighborhood telephone polls, along with the occasional flyer bemoaning a missing small dog.

When neighbors have called animal control to complain about the perceived threat (real threat, if you’re a cat), they’ve generally gotten the same muted response. Coyotes are part of a natural, healthy, urban landscape, and the city has no plans to trap or kill them. We should celebrate their beauty… and keep our cats safely indoors.

So I was a bit surprised to read that authorities have decided to hunt and kill the coyotes that have recently been making the news in Seattle’s Magnolia neighborhood:

The state has identified two problem coyotes. “We’ve had some unsettling reports of aggression,” he said. “There’s been lost pets, small dogs and cats, and this has caused us some concern.”

Southeast Seattle residents have long complained about getting the short end of the stick when it comes to city services compared to our North end counterparts, and this sort of double-standard doesn’t help. I’ve closely followed the coyote reports coming out of Magnolia, and they’re no different from what’s going on down here. Small pets fall prey to the Seward Park coyotes on a regular basis, and I can testify from my personal encounters that the coyotes showed little fear at my presence. Yet for some reason the Magnolia complaints seem to be taken more seriously.

Personally, I agree with the advice we’ve received from animal control. The coyotes are beautiful to watch, and I take great pleasure in seeing wildlife thrive within such an urban setting. We’re a lot more careful with our cat these days, who no longer spends the nights prowling outdoors… though that probably has more to do with his own changing 11-year-old habits than with our discipline. The coyotes have also performed a notable service, effectively controlling a rabbit population in Seward Park that had threatened to grow out of control without predation.

If city or state authorities proposed trapping and relocating the Seward Park coyotes, I doubt there’d be much opposition from local residents, but hunting and killing them? That just seems a bit extreme, considering the minimal level of threat they pose. Fortunately, I doubt it will come to that, as clearly, our concerns aren’t taken nearly as seriously as those of Magnolia and other North end neighborhoods.

UPDATE:
One of the Magnolia coyotes was trapped and killed this morning on BNSF property.

He said the coyote was caught in a leg trap about 5 a.m. today and was euthanized with a shot to the head.

Caught in a leg trap and then shot in the head. How humane.

FYI, this is what a dead, snared coyote looks like: 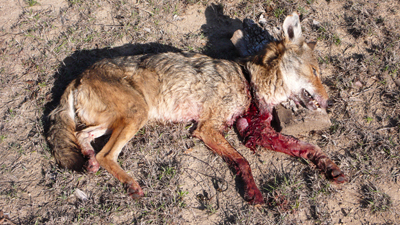 And this is what that coyote looked like back when it was puppy. 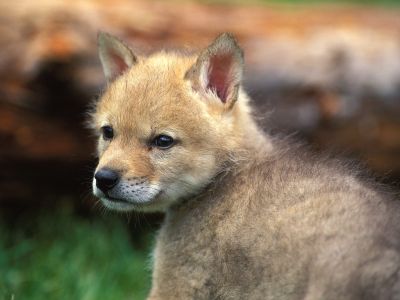