From The Big Picture:

Yesterday, in Backdoor Bailouts for Goldman Sachs?, we noted that GS, as well as Morgan Stanley, Merrill Lynch, and Deutsche Bank, were all made whole on their bad bets with AIG.

That’s right, what was misleadingly described as systemic risk turned out to be in large part little more than a counter-party bailout — money for the very same people who helped cause the problem.

Only the $25 billion figure I mentioned was off by 100% — the WSJ is reporting this morning it was $50 billion dollars, almost a third of $173 billion total AIG loot:

Here is the link to the WSJ article.

Meanwhile, what has become known as The Scariest Chart Ever has been updated (props to The American Prospect:) 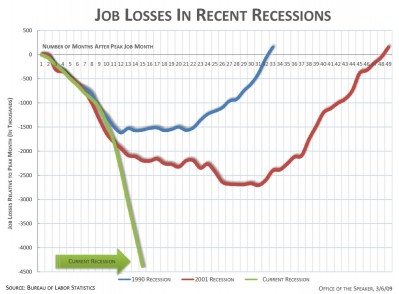 Here’s the link to Speaker Nancy Pelosi’s Flickr posting of the chart.

Someone should make a chart projecting sales growth in pitchforks, which is my growth industry of the day. (In best lunatic stock picker-screamer voice: “People, I am telling you to buy stock in pitchforks, now, because there is only one way pitchfork stocks are going, and that is up up up up up.”

If the Obama administration thinks they can continue the Paulson plan while employment goes off a cliff I’m afraid they are sadly mistaken. My crystal ball is being tuned up so I can hopefully get another 10-15,000 miles out of it somehow, but the “let them eat cake” aspect of this crisis is getting hard to dismiss. Sure, it’s early in the administration, and yes, the stimulus package, flaws and all, did get passed. But good Lord. Exactly how long are the American people supposed to stand for this outlandish thievery by Wall Street?

Is the RICO statute still around?