The Tri-City Herald’s Chris Mullick was rummaging online when he came across the state House Republican Organizational Committee’s new website. 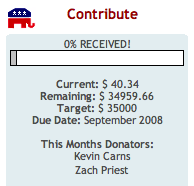 It looks pretty sharp. It’s a bit more colorful than the previous version. It’s got a nice photo of House Minority Leader Richard DeBolt, R-Chehalis, with his family. He’s looking all everymanish in blue jeans and polo shirt. The dog is a nice touch.

And if you look to the right you’ll note a fundraising target they’ve set of $35,000 by September. To date, they’ve raised $40.34 and they’re pretty excited about it.

“0% received!” it reads just above the mostly vacant bar chart.

And, it’s interesting to note that at least half HROC’s contributors are HA regulars. And who says this blog isn’t a fount of bipartisanship?